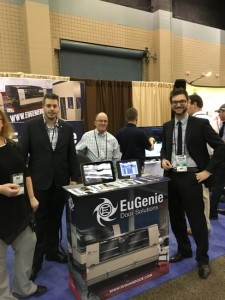 The World Millwork Alliance’s 51st annual convention and tradeshow, held this week at Atlanta’s Cobb Galleria Convention Center, was a showcase of new products and services.

Johnson Hardware showed off a new soft close for pocket doors. It’s expected to launch at the International Builders’ Show (IBS) in Las Vegas in January. It’s rated for doors up to 200 pounds, and it features an actuator that catches the spring which pulls the door closed.

Therma-Tru’s booth featured its Zaha and Borasssa glass choices. The company also announced that a new line of eight-foot-tall, 42-inch-wide doors will launch this fall and will be introduced at IBS. Therma-Tru will also have a new line of beams and shutters available through Fypon.

Quebec-based machinery company Groupe Eugenie, which is also showing at the Win-Door show in Toronto this week, highlighted e-Link, which can view the machine process and gets statistics on production using fewer operators and less floor space.

Italian firm Elisse had an interesting product at the show. The company makes a self-close or soft-close pocket door hardware system. It’s described as a non-automatic, spring-activated system with a 12-year warranty. The track hardware is made of galvanized steel, and a header hides the hardware. According to the company, a major advantage of this system is that there is no need to tear into the drywall to fix any parts. The whole system can be put together in 15 to 20 minutes.

Quanex showed a prototype of its Imperial Rolltrusion Sill that’s expected to be available in mid-2016. According to the company, it’s made via a patented process that co-extrudes PVC and aluminum, which means the aluminum is roll-formed on top of the PVC substrate. Quanex says the sill exhibits thermal properties not achieved in typical thresholds.

ODL says it will introduce new products at IBS. For WMA, the company featured Fairview decorative doorglass, which launched last year. It’s a minimalist design that comes in contemporary aluminum. There are no weld marks within the decorative glass lites. The company also highlighted its retractable screens and custom-designed glass inserts for doors.