The third stop on this week’s World Millwork Alliance (WMA) plant tours in Texas showcased a successful, family-owned business with a long history in Houston that’s striding into the future at a new facility. 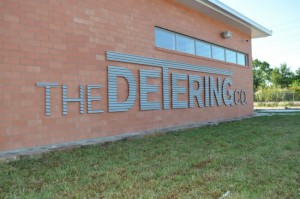 The Detering Company in Houston has been in business since 1926.

In March, The Detering Company moved into its new 107,000-square-foot plant in north Houston after nearly eight decades near downtown. The facility features an updated racking system, lean-inspired logistical and manufacturing processes, and a dock-high loading platform. Detering is also renovating a 25,000-square-foot building on the new property that it’ll eventually occupy.

The business was founded as a brick company in 1926 by Carl Detering Sr. His father, Herman Eberhardt (H.E.) Detering, came to Texas from Germany in 1871. Herman eventually opened a general store on Washington Avenue, and he and his wife, Lina, raised Carl and four other children above the shop. That general store became the headquarters of the family’s building supply company.

The postwar housing boom that transformed Houston into the nation’s fourth-largest city fueled The Detering Company’s success, but current owner Carl Detering Jr. is characteristically modest about it.

“We’re just bumpity-bump people trying to do the best we can,” he said prior to leading WMA members on a tour of his facility.

In addition to Carl Jr., his daughter, Cassie and son, Carlos, also work for the company, making it a third-generation operation.

Detering distributes a wide range of building products, including bricks and stone, cabinets, moulding and millwork, hardware, stairways, plywood and cabinets. It also handles windows by Milgard, Lincoln and Showcase, and manufactures a line of custom-made doors.