With COVID-19 Comes a Major Shakeup for Millwork Distributors

While analysts suggest that the future of millwork remains bright thanks to housing and remodeling, in order to fulfill those demands, distributors must quickly adapt to new technologies amid COVID-19. 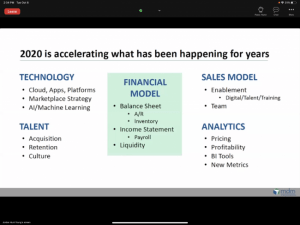 As a result, “We’ve had five years of progress in five months,” said Mike Marks, of Indian River Consulting Group. But even once the pandemic is over, the industry isn’t expected to walk back its much-needed progress, he said. As a result, some of the industry’s most experienced salespeople have begun to look antiquated as they struggle to utilize the latest tools, said John Salvador, managing partner for GRN Coastal.

Marks and Salvador joined host Tom Gale, of Modern Distribution Management, for a panel discussion amid World Millwork Alliance’s annual conference last week. In a session labeled “The Future of Work in Distribution Channels,” the panel wasn’t shy about delivering a grim message to employees who lag behind—including salespeople who rely on the age-old techniques of face-to-face and relationship-based selling.

What we’re seeing is a pretty dramatic shift among [business] owners looking at their inside sales staffs quite differently than they have in the past,” Salvador said—including with an eye of scrutiny. “Today, you need people who are tech savvy,” he added. As a result, there are no more “hall passes” for employees who are unable or unwilling to utilize technology while working remotely. “When the old business model goes away, you have to jump to the next curve that’s happening,” Marks said.

Other important skills include the ability to network and collaborate, as companies move away from heavy-handed leadership and siloed organization structures, both panelists said. Instead, companies have begun to “function more like organisms,” Gale suggested.

As COVID-19 shoves the industry through a period of change, a gap is developing not only between existing workers and new technologies, but between companies that see this period as an opportunity and those that are paralyzed by what Marks described as “target fixation” over cash reserves and the economy. Those that rapidly evolve are aggressively seeking new talent—including individuals who have no industry experience but are technologically versed. What those candidates lack in product knowledge, they make up for through an ability to learn and adapt quickly, Salvador said. Some distributors are so aggressive about this idea that they’re stockpiling the best candidates—even before they need them. “The more aggressive companies are taking advantage of the COVID-19 environment,” he said. Meanwhile, those that are unable to keep up not only lag behind in business but freeze their abilities to hire. They’re also losing talent, both panelists suggested, as experienced employees jump ship for more aggressive companies that can provide greater security. Others are hanging it up altogether, as they struggle to keep up amid the demands of COVID-19.

We all have surge capabilities,” Marks said, including the ability to work harder and longer when required. “But we’re all running out of surge capacity,” he added. “All of the sudden, people are just tired. On top of all that, they have all of these other initiatives being thrown at them.”

This has led to voluntary terminations, Marks said. “A lot of really good talent is saying, ‘I just can’t do it.’ And some leadership just isn’t listening.”