Labor shortages, affordability issues, tariffs—in recent years, it seems that door and window dealers can’t make it through a quarter without some eminent threat to their businesses. Yet, the data for [DWM]’s annual Top Dealers list shows that even in the face of challenges, the vast majority (70%) continue to grow. Some have done it by diversifying their offerings. Others have tapped into new markets. But among those selling just doors and windows, the nation’s top performer has done it by sticking to an extremely narrow niche.

“We are four owners who come from humble beginnings,” says Michael Allbritton, president and CEO of Windows USA, a Royal, Ark.-based dealer. “We appreciate the faith, determination and perseverance it has taken to accomplish our success.”

That success includes a $130 million business that’s been built by focusing solely on vinyl replacement windows. Vinyl is the only material his company sells and while it offers doors, he says 99% of its sales come from windows sold exclusively for retrofit. Among the companies researched for [DWM]’s annual Top Dealers list, Windows USA ranked number one among those with revenues stemming entirely from doors and windows. The number two company (NewSouth Window Solutions in Tampa, Fla.) came in $30 million behind. 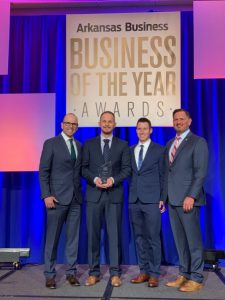 Allbritton joined the company while he was still in high school, staying on as he worked his way through college, eventually becoming vice president. When the previous owner retired, he and three of his coworkers partnered up to acquire the company. Over the past eight years, they’ve managed to grow the company to two and a half times its original size. Two years in a row, Windows USA was recognized with the Governor’s Quality Award, he says. In 2017, it was awarded as Arkansas’ large business of the year. But there’s one accomplishment that he holds dearest: Despite dealing with as many as approximately 100,000 people per year, “We’ve received one complaint in three years,” he says. And that’s how he feels Windows USA makes the top of the list.

It isn’t that his company doesn’t make mistakes, he says, so much as it’s about owning them when they happen.

“Some of the greatest words that people refuse to utter in the English language are, ‘I’m sorry,’” he says. “When you do mess up, the greatest thing you can do is own it and look at somebody and say, “You know what? I’m going to make it right’ … And that means if we’re gonna have to replace it, we’re gonna replace it—with no costs, no shipping, no cost of tech. Everything’s covered.”

Meanwhile, at such large volumes, you might expect Allbritton’s company to hang its hat on low-cost windows, but he says that’s not the case.

“I think the people who really get it wrong in this industry think that everything is about price,” he says, adding, “In order to make it about price, you have to deteriorate quality … It takes so much hands-on work not only to be productive, but to be efficient. And then once you become efficient, you’ve got to ensure that your quality is not being compromised by quantity … to do that means that you’re gonna have to give up profits sometimes.”

As a leader, it also means assuming the mindset that you serve the people who work for your company, he suggests. For Windows USA, in addition to its in-house staff, that includes around 65 outside salespeople and 85 installers—all of whom are independent contractors, but represent the brand and company. There are also sister companies, including Window Mart (a manufacturer and wholesaler), as well as finance and trucking companies.

Regarding contractors, “We’re really, really picky about who we do business with,” he says. “I know it sounds crazy, but we’ll go through 20 crews to get one … We have a 12-step installation process that we demand.” To enforce those standards, the company also employs field inspectors. “You never know when they’re gonna show up,” he says.

As for the idea of franchising, “We’ve had a lot of people ask us if we would,” he says. “We just don’t know enough about how to go about doing that, that we would be inclined to do so. Plus, we’ve worked so hard for so many years for the brand name that we have.”

In the end, “It comes down to betting on yourself, really,” Allbritton says. “The four of us, as brothers in arms, grew up together and we’re all very close friends.”