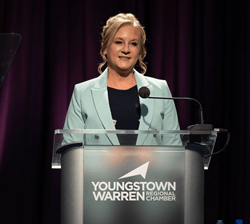 CEO and Chairman Tammy Whitworth represented Window World last month as the keynote speaker for the 2021 ATHENA Awards in Warren, Ohio. Presented by the Youngstown Warren Regional Chamber and The Vindicator, the 28th Annual Athena Awards Dinner recognizes the professional achievements of women in the Youngstown area. An entrepreneur who has overcome significant adversity, Whitworth is leading America’s largest exterior remodeling franchise.

During her keynote presentation, Whitworth described the untimely death of her husband and former Window World CEO, Todd Whitworth, in 2010. His passing left her a widowed business owner and a single mother to their three young children.

As she described in her speech, Whitworth harnessed the power of community, corralling some of her husband’s most trusted advisers and friends to form a board of directors. With their guidance, Whitworth has led the company to continued success.

After directing the path forward for Window World following the loss of her husband, Whitworth was faced with a new challenge: breast cancer. Diagnosed in 2015 at age 47, Whitworth fought and won the battle. Now cancer-free, she never allowed the illness to hinder her company’s or her family’s success.

“While I hope my story encouraged anyone navigating their way through one of life’s challenging moments, it was heartening and humbling for me to be surrounded by hundreds of women who make impactful contributions to their communities each day,” Whitworth says. “Each ATHENA Award recipient is raising the bar for women around the world and setting a precedent for future generations of female leaders to follow.”