A window company is grabbing national headlines after a promotion tied to the Cleveland Indians’ 15th consecutive win on Thursday night led to free residential fenestration products for a couple hundred homeowners. 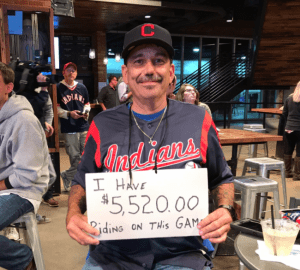 One of the Universal Windows customers who benefited from the promotion.

Ohio’s Universal Windows Direct launched the promotion this summer to mark the company’s 15th year in business and to honor the local major league baseball team. Customers who purchased doors, windows or siding in July were eligible for the rebate. About 260 homeowners will be  reimbursed for about $2 million in home-improvement work after the Indians defeated the Chicago White Sox 11-2 in Chicago on Thursday. (Universal Windows Direct had taken out an insurance policy to cover expenses associated with the promotion.)

“Our co-founders, Bill Barr and Mike Strmac, along with our president, Chad Howman, are huge Indians fans,” Anne Wade, a digital marketer and designer with Universal Windows Direct, told DWM on Friday. “When the opportunity to partner with them earlier this year came along, they jumped at the chance. The Indians have been hot later in the season, so they hatched this amazing promotion. They really wanted the customers to know that we wouldn’t be here without them.”

Gary Miller of Cleveland was one of the lucky winners. He’ll get money back for a sliding door that cost him about $3,200.

“I had no idea that this promotion was going on,” he told DWM. “I almost forgot about the Indians winning 15 in a row. That day, I told my wife, ‘you know, today is the day that the Indians play, and if they win the 15th in a row, that door will be free. So we got really excited.”

According to Cleveland Scene, the most expensive project that Universal is covering costs about $30,000.

Wade says the whole experience has been a roller-coaster ride.

“Everyone here is ecstatic,” she says. “We are so thrilled for our customers. We know how hard they work for their money, so it’s an incredible feeling to know that we’ve helped lighten their load a bit. Personally, this has been a great ride. I, too am a huge Indians fan. I cheer for them regardless. So, being able to root for them alongside our incredible customers has been a tremendous experience. It’s almost like the stars aligned just for them. I have friends and family who are customers, I know how much of a struggle home improvements can be. Seeing these people win is almost like seeing my family win. It’s been a very humbling experience.”

Universal Windows Direct was ranked No. 21 on 2017’s list of  DWM’s top door and window dealers in the U.S. The company had estimated revenues of about $32 million, and it has 92 employees.