America’s most famous former correctional facility needed a correction of its own, and a window company came to the rescue. Indow Windows (IW) has created a window solution for Alcatraz that opens up greater public access to the former federal penitentiary. 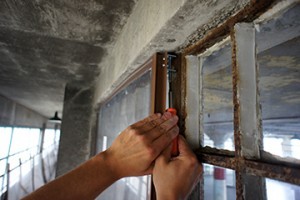 An installer tightens the friction pad on the removable Indow Window mullion at Alcatraz.

The gun gallery in the New Industries Building, a part of Alcatraz previously off-limits to the public, is full of broken windows where guards once trained their weapons on prisoners below. Because an art exhibit is planned for the gun gallery, the National Park Service required the broken windows be secured before opening it to visitors.

“The windows were a hazard to the public because they’re broken and there was concern that the public would walk away with pieces of broken glass [as souvenirs],” says Sam Pardue, CEO and founder of Indow Windows. “We needed to shield it with one of our inserts.”

This, however, posed a challenge to the company.

Due to federal regulations, the project had to be done without putting any permanent markings on the site. Besides that, the project called for inserts that were bigger than IW had ever manufactured.

“The window frames were up to 25 feet wide, so we needed a way to subdivide the space into smaller windows without any modifications to the building,” Pardue says.

That’s when IW came up with pressure-fitted mullions with a mechanism that allows for screws to be used that are never drilled into the building itself. Pardue says once they came up with that, the task was fairly easy.

The exhibit is set to open on September 27 and will allow visitors to view the room where inmates did laundry for the military and manufactured clothing.

Pardue says he’s honored to have been chosen for the project and foresees it opening up new doors for IW.

“This could be the kind of national exposure that takes us to the next level,” he says. “This is going to open doors to more complex commercial projects because not only is it a high-profile project but we were also able to come up with a custom solution for [it].”