Attendees of WinDoor were met with plenty of reminders for why—no matter how familiar they are with the industry’s offerings—there are reasons to attend the annual trade show. Exhibitors with products spanning as much as decades say they have every reason to return to the annual show with those same offerings in tow. Meanwhile, long-standing members of the industry highlighted the value of relationships amid receiving numerous awards. 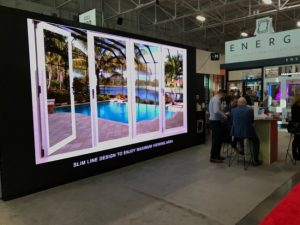 The event kicked off Tuesday with meetings, followed by an annual event held by Energi that stretched well into the night. Wednesday, show traffic ebbed and flowed, but left most booths busy throughout the day.

Officials say they’re sticking with the established pattern by shifting between locations, this year landing back in Toronto. And while some participants told [DWM] they wouldn’t mind a more fixed format, others say that movement encourages attendance among customers unwilling to travel across regions.

Regarding why shows like WinDoor remain essential, “I think you have to be here,” said Wade Curie, a regional sales rep for Tremco. “We don’t always have new products to unleash, but it’s about showing face.”

“One of the main reasons we come to this show is to show support for our Canadian customers,” said Carrie Scheetz, marketing project manager for Quanex. “Canada is where Super Spacer got its start,” she added. Thirty years later, everyone might be familiar with the company’s foam spacer system, she said, but there are other things to promote, some of which go beyond products. In addition to attending trade shows, in a new program the company calls Signature Service, Quanex looks to build a sense of relationship between its workers and customers throughout the year.

“When you buy Quanex, you’re buying more than just products,” Scheetz pointed out. “You’re buying services—services that are backed by a lot of hard-working, dedicated people.” 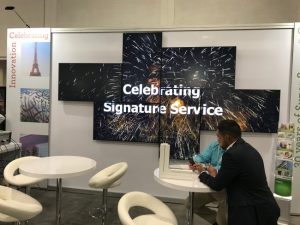 Through a series called Service Spotlights, the company provides mini-profiles for employees, the faces of whom were shown on a multi-panel display in its booth. In a separate display, the company also promoted Sparklike, a line of devices designed to perform noninvasive testing for gas content in insulating glass units. Quanex is the sole distributor for Sparklike in the U.S. and Canada, said David Hill, equipment sales manager. The latest offering includes a unit that’s capable of testing triple-pane units, which Hill said is especially important to companies operating in Canada.

While Quanex is just one of several companies relying on large-panel, digital displays at this year’s show, others stick to more subtle approaches. John Kunz, manufacturing manager for John Evans’ Sons, said, even though the company’s products have been around for decades, few can pass by without stopping to test its constant force balance systems. The product display includes little more than a set of double-hung windows but, “Most people can’t resist sliding them up and down at least once,” when they read the product claims, he suggested. Meanwhile, “If you get 10 people to walk into your booth, it’s worth it,” Kunz added. If even one or two of those companies switch from a standard block and tackle balance system to the side-load concept, he’ll consider the show a success, he said. 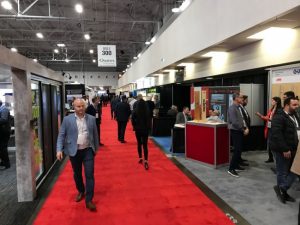 The show floor at WinDoor kept busy on Wednesday.

Others rely on WinDoor as a distinctly Canadian show, in order to dodge U.S.-based companies. With tariffs on Chinese goods continuing to weigh across the U.S., the show helps to apply a regional filter of sorts, for those looking to focus purely on Canada. Randy Puah, vice president of sales and marketing for Mennie Canada Limited, said his company was in the process of establishing distribution in the U.S., but, “Right now, we’ve put a halt on the U.S. thanks to those tariffs,” Puah said. “We were working to get set up, but when they went to 25%, everything stopped.”

In a panel discussion on codes and testing, attendees were reminded of why it’s imperative they “come together” to discuss the industry’s biggest issues in person. Robert Jutras, with UL Building Envelope Performance, suggested that an annual refresh on standards is imperative, as companies across Canada face new requirements.

“These standards, they evolve over time, so it pays to ensure that you have the latest versions,” Jutras urged. “Make sure you have the version that needs to be referred.”

Others suggested that with an influx of companies looking to capitalize on testing requirements, there’s an increased need to gather at events like WinDoor to “swap notes.”

“I think our industry—the people who make windows and doors—together, need to find a way to push back,” commented Al Dueck, president of Duxton Windows and Doors, about what he said is an influx of untrained, unknowledgeable field testing firms.

“You have every right to go out, with your level, with your whatever, to ensure that your products have been installed properly for testing,” another attendee added. “Otherwise, it’s your products that will pay the price and be held accountable.”

At WinDoor’s Main Event, held Wednesday night, the industry was reminded of the value for those collective discussions, as officials for Fenestration Canada presented Lifetime Achievement and Hall of Fame awards. Hall of Fame Awards went to Lothar Colberg of Lothar Industrial Sales, who received a Lifetime Achievement Award. Skip MacLean, director of business development for TruTech Doors, received the C.P. Loewen Award. Amid his acceptance speech, MacLean recounted a list of relationships spanning decades—all of which he said were imperative to his career and the success of his companies. Over events like WinDoor, it’s those collective voices, he and other recipients suggested, that comprise the fabric of an industry.