WinDoor Notes: Montreal and Beyond 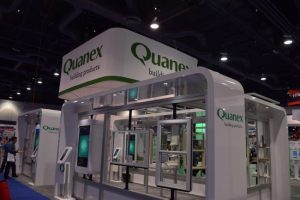 interesting story lines. There was a new city after more than 20 years in Toronto. There was bigger attendance and overflowing energy in the aisles. And there were some great new products and companies that debuted at the show as well.

Also, there was a huge fire. But more on that later.

Show organizers said the new WinDoor was a resounding success in its new city.

“We are absolutely thrilled with how the show went,” said Cindy Gareau of Zzeem, the company that now manages the show. “It exceeded even our expectations. We knew it was going to be fantastic with the new city and the new structure and the terrific effort that (Fenestration Canada board members) Stephane Labelle and Laura Weil gave to this event. It really was a revitalized show. I spoke to a lot of exhibitors, and they are really pleased. They said it hasn’t been like this in over eight years. That’s something you really want to hear. They said that not only were there a lot of people here, but the leads were who they wanted. So that’s great.” 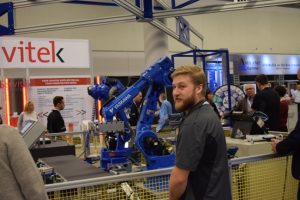 I heard the same thing all over the exhibition hall.

“The show has been awesome,” said Jonathan Chauvette of machinery maker and importer Groupe Eugenie. “We are almost doubling the number of leads from last year.”

“It was such a nice feeling being in the middle of the show floor and just panning around and seeing so many people in the booths engaged and everybody smiling,” said Weil. “There was such a positive energy in there.”

Weil added that WinDoor’s continuing success is about more than a trade show expanding and growing — it’s about the future of the fenestration industry in Canada.

“We really needed this show to be revitalized for so many reasons,” she said. “The assoociation has a lot of work that we want to do, but we need funding, and WinDoor is a key component of that funding. This year we had good sponsorship, but we need more so we can start allocating the funding to education. Also, we don’t even know what is going to happen with the new political climate in the U.S. and how that will affect our industry here as well, so we have to be prepared for that. We’re going to change the show up every year. We’re going to make it work for each location.”

Weil also praised Gareau and Zzeem for their organizational acumen. 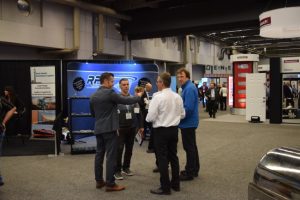 “Teaming up with Zzeem has been exceptional, because they can help us actually execute our ideas, and that was a key component of our success,” she said.

One of the driving forces behind the move to Montreal said he was more than pleased with the show.

“I was impressed that what I saw was pretty much what we decided to do from the start,” said Labelle, who chaired Fenestration Canada’s WinDoor committee. “With an event like that, there are a lot of things you can’t control. We had a big challenge in front of us to renew the show.”

Next year’s WinDoor is scheduled for November 28-30 at the International Centre in Mississauga, Ontario, which is located near Toronto’s Pearson International Airport. While it’s unclear if the show will stay in the greater Toronto area, many attendees said they’d like to see it move around.

Ideas we heard included alternating between Toronto and Montreal (after all, most of Canada’s door and window companies are located in Ontario and Quebec), as well as occasional shows in Vancouver. One attendee suggested the west coast city as a host every third or fourth year.

“Just the fact that we succeeded here makes me think that it won’t be a problem for us to succeed back in Toronto,” said Labelle. “We’re going back there, but we’re not going back to the same location. We want to keep the same vibe, but we also want to give the chance to people who couldn’t make it to Montreal to experience the same thing. The goal is to be like Fenestration Canada’s annual meetings, so we need to move around. We cannot afford to just stick to one place anymore. So next year Toronto, the year after that, who knows? But with the result we had in Montreal this year, I wouldn’t be surprised if we came back.”

Labelle, who used to work with Groupe Eugenie but now works for a construction software company that’s not directly tied to the fenestration industry, said he’s been asked to chair Fenestration Canada’s WinDoor committee again, a testimony to the great work he did in bringing the show to Montreal. Labelle said he’s still considering the offer.

All New and All the Rage

One of the most interesting products at WinDoor came from a company that says it’s barely three weeks old. Shimflex’s tiny booth was so busy, I didn’t get to visit until the last half-hour of the show on Thursday.

Shimflex is a galvanized steel component that’s used to greatly reduce time spent on window installation. It’s a simple component with a deformable base that can expand and thereby help an installer adjust a door or window. Because it eliminates the need for nails, screws or cedar shims, the company says it can be installed with a basic hammer and drill, adding that it cuts installation times by a whopping 80 percent. Additionally, Shimflex’s owners say the component also facilitates better coverage of insulation foam, thereby improving the energy efficiency of doors and windows.

Shimflex’s Eric Gladu told us his colleagues have been visiting construction sites around Quebec and enticing installers to try the product out, and he said the response has been tremendous.

“They all love this product,” he said. “We’ve put about 100,000 of these onto jobsites around Montreal.”

While the WinDoor show was winding down on Thursday, many attendees were briefly drawn away from the Palais des Congres exhibition hall to watch a huge fire a block away.

More than 50 vehicles and 120 firefighters responded to the five-alarm fire, and it blocked streets near the convention center for hours.

The four-story Robillard Building, which was built in the late 1800s, was vacant at the time of Thursday’s fire, according to a report from CBC News.  The historic structure had hosted the first-ever screening of a motion picture in Canada in 1896.

I’m not an expert on fires, but Holly Biller, Key Communications’ vice president of information services, is married to a fireman. She texted him photos of the blaze and the response to it, and he confirmed that it was indeed a big one.