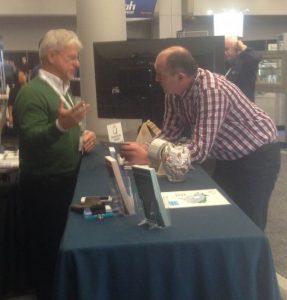 A customer visits the Keystone Certifications booth at WinDoor in Montreal.

WinDoor in Montreal swung into high gear on Wednesday, and nearly every exhibitor described an event that was much busier than last year’s trade show in Toronto.

“It’s looking like a lot more engagement at this show,” said Graeme Morrison of Mennie Canada. “There are a lot of Quebec-based customers who are showing interest.”

“The move to Montreal has been exciting,” said GU-Ferco’s Charlie Maves, national U.S. sales manager. “They hit a home run by moving to Montreal this year. I think the organization should have done this a long time ago.”

“We had some pretty good traffic,” said Mike Bruno, co-owner of Everlast. “I think we’re going to come away with a couple of Quebec customers, and we didn’t have any before.”

The Everlast booth featured signs celebrating the company’s long heritage in the window industry. It also featured the Altitude+ window, which meets the CW classification. That means it can be used in mid-rise buildings with institutional applications. It was developed in collaboration with Energi Fenestration Systems, and Bruno it’s a revision of their original design. He said Ply Gem is now the top user of the Altitude+ system.

Machinery always has a big presence at WinDoor. Quebec-based Groupe Eugenie drew a lot of attention to its booth with a demonstration of its Anny CNX, a three-axis CNC door jamb machine.

Forel’s booth featured videos and literature about its high-speed production line for windows, which can produce an insulating glass unit every 20 seconds.

The Canadian market features a lot of door makers, and there were plenty on display at the show.

Novatech’s large booth featured a new lift-and-slide door that qualifies for Energy Star in Zones 1, 2 and 3.

“It has a slim frame and is very contemporary, but it offers high performance,” said the company’s Robert Daoust.

Ontario-based Door Com showed off a range of fiberglass doors in both contemporary and traditional looks. Aldo Cascone, sales and marketing, said fiberglass is really starting to take off in the door market.

“It’s got strength, it’s got the look of wood and it doesn’t dent like steel doors,” he said.

Fenestra was one of the more unique exhibitors at WinDoor. It’s Canada’s largest buying group for smaller door and window fabricators. The co-op helps these companies by negotiating lower prices from suppliers.

“The show has really been great,” said Fenestra’s Brandon Vander Heide. “It seems like this is an amazing community between all the operators here and the attendees. They keep getting in line to figure out what Fenestra is. It’s been a great time.”

Among the day’s educational events, the social media session generated a lot of buzz. Led by Laura Weil of Eurovinyl Windows and WinDoor organizer Stephane Labelle, the class emphasized the importance of social media to boost businesses in the industry. Weil, Labelle and Vince Porcelli, vice president of sales at Everlast, also encouraged attendees to tweet during the show with the hashtag #windoor 2016.

Finally, WinDoor wrapped up the day with an awards ceremony. Fenestration Canada, in conjunction with DWM magazine, selected five honorees in various categories. 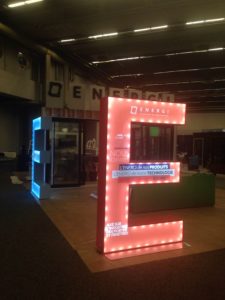 The judges noted that it was a difficult decision to reach in most categories. They also said they’d like to expand the awards next year to include marketing materials. This year, they specifically cited ODL’s Blink literature and Kommerling’s “newspaper” as outstanding examples.

Next year’s WinDoor show will be held November 28-30 at the International Centre in Mississauga, Ontario, which is located near Toronto Pearson International Airport.