The WinDoor show in Ontario shifted into celebration mode on Wednesday as Fenestration Canada threw a party for 500-plus friends to honor the association’s 50th anniversary. 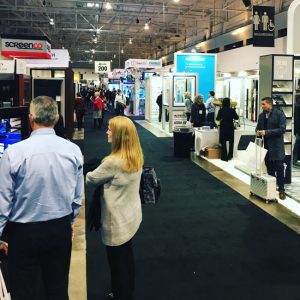 The WinDoor trade show opened on Wednesday in Mississauga, Ontario.

Billed as the Main Event, the soiree was tagged as a celebration of Canadian fenestration’s past, present and future. The WinDoor Best Booth awards were presented by DWM, and Fenestration Canada honored 15 Pioneers for their work and contributions in the industry.

In the Best New Product — Windows category, Everlast’s Altitude was the winner. It meets the CW Classification, meaning it’s suitable for use in mid-rise buildings with institutional application. It provides the possibility of multiple assembly and opening configurations.

In the Best New Product—Doors category, Trimlite’s Solutions series was the winner. The door design eliminates screw holes and uses a compression seal and interlocking joints. The company says the frame is tested to meet temperature swings from -30 degrees to 180 degrees Celsius.

In the Best New Product—Other category, Wintek’s grid system won. The system eliminates the hassles of applying SDL grids on vinyl windows with clip-on PVC extrusions that eliminate glue, minimize tape and reduce grid application labor costs by up to 75 percent, according to the company.

The Best Marketing Campaign went to ODL’s Blink blinds-between-glass product. The judges said it was notable for reaching both consumers and the industry in a compelling manner.

The Most Creative Booth went to Sunview Patio Doors, which used a shipping container with its products in an engaging holiday-themed display. Sunview won the same award at the 2016 WinDoor show in Montreal.

And finally, the Best Booth Award went to INT Machinery. Its display featured a wide range of operating machines for attendees to see in action.

During the Main Event, Fenestration Canada president Lisa Bergeron announced that the 2018 WinDoor show will be held December 4-5, 2018 in Quebec City.

While WinDoor 2017 offered a record-setting education program with 19 presentations (up from eight in Montreal in 2016), the heart of the event remains the trade show. More than 90 companies had products on display.

One newcomer was RegaLead, a leading U.K. provider of decorative glass. The company recently opened its North American operations in Vaughan, Ontario.

“Canada is in many ways similar to the U.K. market,” said RegaLead joint managing director Guy Hubble. “We saw a lot of opportunity here. Culturally, the Canadian market is closer to the U.K. market. It’s small to mid-sized producers, plus a few big guys. It’s an easier market to take on. The U.S. market can be too big. We located here in the center of the Canadian window industry. There are 150 potential customers within a half-hour drive of us. It’s a stepping stone. We will go to the U.S. at some point.”

“This is a great show,” he said. “This is one of the best small trade shows in the world.”

Laminates were a popular product on display at WinDoor.

“Attendance today has been good,” said David Harris of American Renolit. His company recently introduced a true black exterior, increased its interior range of colors, and is extending its warranty for Exofol FX film from 10 years to 20 years.

Continental’s Skai also showcased a dark color — Jet-Black, which  the company’s Marco Patermann called the darkest black available on the market. He added that it has the lowest heat build-up in the industry, staying 30 degrees cooler than competing products.

FeneTech was one of several oftware companies at WinDoor. The company promoted its new FENml initiative. (FENml stands for fenestration manufacturing language.)

FENml is designed for glass fabricators and window and door manufacturers, machinery manufacturers, software providers, and suppliers for the fenestration industry. FENml is a baseline communication standard that uses the concepts of IIoT and Industry 4.0, allowing machinery, software, and suppliers to “talk” the same language.

The company says it’s planning to implement a new CRM in the near future.

Roto’s booth highlighted its new 9100 contemporary sliding patio door handle.  A unique attribute is that the handle fits within the stile, so there is no interference with the glazing area, said Dan Gray, Roto North America’s director of sales.

“Overall, things are great,” he said. “It’s been a good year, and we hope to see more next year.”

Skyreach showed off a couple of new hopper windows that can be fabricated with triple glazing.

“It’s easy to make for the manufacturer,” said the company’s Ray Yu.

Manutech displayed a wide range of its equipment for transporting fenestration products. According to the company, the equipment lets a single worker move an 800-pound window unit.

“The show has been good for us,” said CEO Jonathan Harvey. “We’re really happy with the results.”

Mennie Canada’s booth featured side lights for its fiberglass doors. They are designed to match its 8-foot mahogany entry systems. It also had new contemporary designs, as well as a new reinforced composite door jamb.

The WinDoor show continues through Thursday. Stay tuned to dwmmag.com for updates.