What a Difference a Space Makes 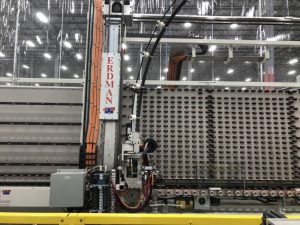 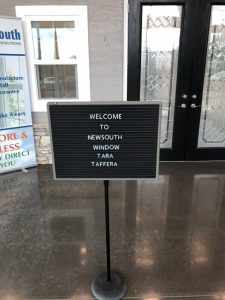 So nice to be welcomed!

It is one thing to know about a company’s history, to have had many conversations with the management team, and quite another to see the operation up close. When traveling to Florida this month, I had some time to make a stop at NewSouth Window Solutions in Tampa. The company, which makes and sells its doors and windows, continues to catapult up DWM magazine’s Top Door and Window Dealers list.

I first got to know these folks, namely founders Earl Rahn and Dan Ochstein, back in 2012 when they were just getting started in Florida.

Fast forward to today and they’re in a new 238,000-square-foot facility (their fourth since the company was founded in 2010). Rahn walked me through the plant, which has plenty of space to grow—including vertically, with 43 feet over head, should they need extra storage. It was pretty cool to walk through and say things like, “Oh, you have the new Erdman fast speed IG line.” Or, “How do you like the GED RoboClean?” (They love it, by the way.)

They couldn’t bring in the Erdman machine until they moved into the new facility, as there wasn’t room for it in the previous space. The plant also has plenty of room for new corner cleaners and Ochstein said he’s also looking for some CNC machine centers. 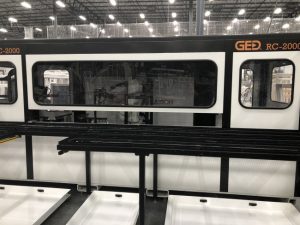 Why so much automation? Well, Ochstein told me that the labor problem has finally hit home for his company. And if you can’t find four people to hire, that’s when machines like these prove their value, he explained.

And it’s tough to find employees in Tampa, I’m told. After all, you have Custom Windows not that far away in Ocala, and others in the area as well. And when you do find employees, they won’t hesitate to leave for a little extra money down the road, Rahn said, which is why he believes very strongly in the importance of taking care of his employees.

Another way the company aims to sharpen its operations includes better software. For instance, they’re planning to convert to the Fenevision system from Fenetech, which Ochstein told me he expects to be a game changer—one they plan to use for a bird’s eye view of the entire plant’s operations. The software also is expected to be a tool for keeping up with growth—including their first location outside of Florida, in Charleston, S.C. That’s set to happen in 2020. I guess I’ll have to check it out the next time I’m passing through.