Codes and advocacy were the focus on Monday as the Window and Door Manufacturers Association (WDMA) opened its spring meeting and legislative conference at the Renaissance Dupont Hotel in Washington, D.C.

The annual gathering is held in conjunction with the National Lumber and Building Materials Dealers Association (NLBMDA) and the Northeast Window & Door Association (NWDA).

WDMA president Michael O’Brien updated the membership on the state of the association. He highlighted successes from WDMA’s OneVoice Advocacy Program, which seeks to establish the group as the pre-eminent representative in Washington for the door, window and skylight industry. 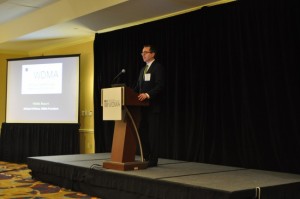 “If you don’t have a seat at the table, you’re going to be on the menu,” he said.

O’Brien said WDMA is now recognized as a major presence on behalf of the industry before Congress, government agencies and code bodies, especially for energy efficiency. He noted WDMA’s role in shaping Energy Star Version 6.0, which went into effect in January.

“Our work there led to long-term changes in the program, and a more open and collaborate process for developing Energy Star Version 7,” he said.

WDMA is also working closely with the National Association of Homebuilders (NAHB) to revise the U.S. Environmental Protection Agency’s Lead Renovation, Repair and Painting Rule. The groups want to restore the opt-out clause and stop enforcement of the rule until the EPA approves a viable test kit.

2014 was a successful year for WDMA on the codes front, O’Brien said. He noted that the organization achieved all its objectives for the 2015 International Green Building Code (IgCC).

WDMA also scored code successes at the state and local level, O’Brien said. He pointed to North Carolina, where in September the state’s Rules Review Commission rejected a temporary regulation that allowed permit holders there to opt out of using low-e fenestration products in residential construction because of a misplaced fear of fire hazards.

O’Brien also discussed WDMA’s upcoming U.S. market studies. The group entered into a two-year contract with Hanley Wood and Virginia Tech to conduct surveys on windows, residential entry doors and interior architectural doors. The first reports come out in May, and according to O’Brien, they’ll be comprehensive.

WDMA’s leadership discussed its 2015-2017 strategic plan, which aims to strengthen the group’s position as the leading fenestration industry advocacy group and advance the perceived value of high-performance and high-quality doors, windows and skylights.

WDMA also hopes to work with the American Architectural Manufacturers Association (AAMA) to streamline standards and make them more sensible and valuable to consumers, and O’Brien said WMDA still actively represents window interests in the development of product category rules (PCRs) for windows and skylights.

Also on Monday, Al Babiuk, the CEO of Loewen, was elected chairman of WDMA. He replaces Steve Donner of Weiland Sliding Doors and Windows. Babiuk had been vice chair prior to his election.

On Tuesday, Sen. Cory Gardner, R-CO, and Rep. Tom Marino, R-PA, will be on hand for the Washington Briefing Breakfast. Later, WDMA members will visit senators and congressmen on Capitol Hill.

Stay tuned to dwmmag.com for all the news from the event.