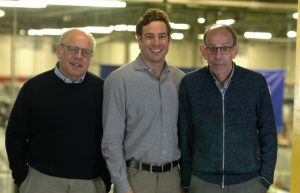 At Wallside Windows, family is more than just who owns the business—it is the business, says chief of staff Adam Blanck, a third-generation worker. It’s that mentality that has kept employees and customers returning to the Michigan-based company for 75 years, he suggests.

“You always have to take care of your customer,” says Stanford Blanck, co-owner of Wallside and Adam’s father. “There’s nothing we won’t do to make our customers happy. And even if it’s not our fault, we will still make them happy. That’s the way we roll, and as long as I’m here that’s the way it’s going to be.”

That philosophy dates back to 1944, when the company was founded by Stanford’s father, Martin Blanck, as a home improvement business. An Army veteran and son of Eastern European immigrants, Martin sought contractors who displayed high standards of quality and service. In the 1970s, he added vinyl replacement windows, making Wallside one of the first companies to utilize the new technology. Then, in the 1980s, Wallside Windows began to offer low-E glass.

“[Martin’s] goal was to really control the entire process—from sales to installation and service long after the installation—to ensure that our customers are getting value and being taken care of,” Adam says.

That vision is one that remains a cornerstone, he suggests, as the company sells, manufactures and manages the installation of vinyl replacement windows in both Michigan and Ohio.

Wallside employs approximately 135 people, including in sales and manufacturing, out of its Taylor, Mich., factory. The company also contracts with about 300 installers who place about 600-700 windows per day, as well as technicians who service those products. The company offers a 35-year, transferable warranty, which also leads it to host a service department that’s equipped with parts for even discontinued windows. “We don’t want to be the company that says, ‘Sorry, we don’t make that anymore,’” Adam says.

Stanford Blanck got involved in the family business in 1976, when there were just two sales people and one or two installation crews, he says. The original factory was smaller than his current office, he remembers. But when the company moved to a 72,000-square foot factory, his father Martin told him to fill it, which he has with the help of his brother, Stuart.

In 2014, Adam joined the Wallside team after careers in politics and law. He admits his title of “chief of staff” is a self-created title, but it does describe the many hats he wears on a day-to-day basis. Adam says his background in business and law has allowed him to think strategically about how to “become the best window company not only now, but for the next generation.”

Ensuring the success of a 75-year-old business is “ripe with challenges” he says, but in many ways like a remodeling project. “We need to keep the structure that has made us successful, but continually update different aspects, as the market shifts to ensure that we are at the cutting edge with our product, our process and our service,” Adam explains.

While Wallside invested heavily in television marketing since its inception, now the company puts more of its advertising funds toward digital. Adam has also helped Wallside digitize a lot of its operations, implementing more data collection and tracking, which he says helps ensure “that we have our fingertips on the pulse of the business at all times.”

Wallside surveys each customer following the installation process to pinpoint any issues customers may experience.