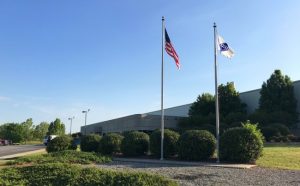 Veka’s new facility in Morganton, N.C., is expected to open later this year.

Dr. Werner Schuler, global COO for Veka, and Joe Peilert, president and CEO of Veka North America, were among the company leaders in attendance. Local officials on hand included Ronnie Thompson, the mayor of Morganton.

Marketing director Steve Dillon introduced attendees to the types of products that will be manufactured in the Morganton facility. A temporary showroom was set up for visitors, and there are plans for a more extensive one to be built in the future.

After product presentations and discussions, the group moved to the manufacturing floor, where construction is in full swing. Morganton employees and Veka executives fielded questions from guests while walking through the facility.

“In support of customer growth, Veka added this fourth, 163,000-square-foot extrusion facility to its mix, bringing the total manufacturing floor space in North America to 1.2 million square feet, solidifying its position as the largest window and door extrusion company in the U.S.,” said Peilert.

The total investment will exceed $10 million and is expected to create 80 jobs within two years. Veka East will be able to accommodate up to 30 extrusion lines and include manufacturing support, value-added services, offices and a warehouse. Operations are expected to start in the second half of 2018.