Inspection technology is transforming the landscape of glass manufacturing. And, as fabricators gain further control over the quality of their products, architects increasingly include more stringent demands in their project specifications. Inspection equipment makes the fabrication process easier and raises the bar industry-wide.

Automation has been a major buzzword in the glass industry for years due to its ability to increase efficiencies and safety. The key to increasing the functionality of automated machinery and equipment is software.

FeneTech’s FeneVision ERP connects the entire production process from ordering to fabrication and shipping. It can also interface with inspection equipment such as Softsolution North America’s LineScanner. AJ Piscitelli, who is in charge of business development for FENml at FeneTech of Aurora, Ohio, says that instead of accessing the information at the LineScanner, the user can access it in their FeneVision Business Intelligence (BI) app.

Using the FeneVision program, a company can input the specifications required and the scanner can detect whether or not the glass is “in or out of spec.” If it is out of spec, it will alert the operator who can then make the determination about whether to approve the glass.

“What’s somewhat new is taking that rejection data and getting it into the ERP side. Companies are able to pull up the information about a unit scanned if the customer calls with a quality issue. The company can pull up the scan sheet to see if there was an issue or if the defect happened after the glass left the factory,” says Piscitelli. 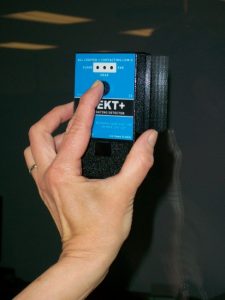 EDTM offers a variety of low-E coating detectors such as this one, which can detect that a low-E coating is properly installed on insulating glass units with a single test from a single side. Photo: EDTM

Another way software is improving the production process is by storing data about glass rejected on the production floor. When that glass type is being processed again, the software will send the rejected glass back to the cutting table.

“We’re looking at ways to facilitate making the process easier. I see a lot more quality and rejecting enhancements coming into the software over the next year or two,” says Piscitelli.

He emphasizes that software plays a key role in being able to create actionable information from the data collected during the fabrication process.

“We have to have software to understand where the defects are coming from. There could be a common factor such as the conveyor line, a defect in certain glass types from the manufacturing, down to a customer ordering glass that can’t be produced due to physical limitations,” he says. “The software gives companies the power to make that determination; before they had to do that by gut feeling.”

Having this technology allows fabricators to produce better products overall, according to Piscitelli, and thus increases customer satisfaction.

“If a customer gets a bad product there could be a waste of time and resources on the company’s part due to potential financial penalties or logistics costs. Really, it’s in the manufacturer’s best interest to consistently send out perfect product as often as possible.”

The information in this article was originally part of the feature titled, “Under Review.” To read the full article, which originally appeared in the August 2020 issue of [DWM]’s sister publication USGlass magazine, click here.