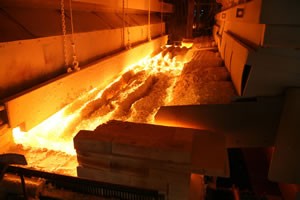 PPG Industries, Eastman Chemical Co., Saint-Gobain Corp. and Ingersoll Rand were among the more than 120 manufacturers recognized last week by the Department of Energy (DOE) for making wise investments that reduced energy costs and greenhouse gas emissions while improving their bottom lines.

Through the DOE’s “Better Buildings, Better Plants” program, which is a key cog in President Barack Obama’s efforts to double energy productivity by 2030 while saving businesses money and energy, more than 1,750 plants across the nation have saved about $1 billion in energy costs and 190 trillion British thermal units, which is equivalent to 11 million metric tons of carbon dioxide emissions.

“Through the Better Plants program, American manufacturers are cutting energy waste and saving millions of dollars each year,” Hogan said. “These manufacturers are leading by example – demonstrating the promise of energy efficiency, increasing competitiveness in the private sector and reducing harmful carbon pollution.”

Across the United States, manufacturers spend more than $200 billion each year to power their plants, according to a DOE release. Through the Better Plants Program, American manufacturers sign a voluntary pledge to reduce energy intensity by about 25 percent over ten years or thereabouts. To date, participating companies represent nearly 8 percent of the total U.S. manufacturing energy footprint, but consume close to 15 percent of the U.S. chemical manufacturing sector’s energy use and 23 percent of energy used across the nation’s transportation equipment manufacturing industry, according to the announcement.

“We are proud to be recognized by the Energy Department as a manufacturer making smart investments to save on energy costs, cut greenhouse gas emissions and improve the company’s bottom line,” says Diane Kappas, PPG’s vice president of environment, health and safety. “PPG continually strives to act in ways that help ensure the longevity and resilience of our business, our environment, and our society.”

PPG, which is based in Pittsburgh, has committed to a series of sustainability goals, including energy intensity and greenhouse gas intensity reduction, spokesman Robert Struble says.

But PPG has hardly been alone in its environmentally-friendly efforts. The recognition was just the latest for the Tennessee-based Eastman Chemical Co., which had been honored by the Environmental Protection Agency (EPA) as its Energy Star Partner of the Year earlier this year.

“Energy efficiency is one of the global macro trends challenging the world and Eastman is addressing this challenge through sustainable solutions that include our own emissions reductions and energy efficiency efforts, as well as the development of products that enable consumers to reduce emissions,” says Jim Rogers, chairman and CEO of Eastman. “We are proud of Eastman’s partnership with Energy Star and our energy-management achievements.”

The “Better Buildings, Better Plants” program is part of President Obama’s broader Better Buildings Initiative to help American commercial and industrial buildings become at least 20 percent more energy-efficient over the next ten years. The retrofits are projected to save U.S. businesses $40 billion in energy costs, while creating 50,000 jobs, according to the Obama administration.

The Initiative also includes the Better Buildings Challenge through which U.S. companies, universities, school districts and state and local governments have committed to reducing energy use across their building portfolios by 20 percent or more.