GAF and Ply Gem recently announced two more winners of the GAF Homeliest Home Contest winners. In addition to the Peek family from Camillus, N.Y., other winners the Phipps family from Baltic, Conn., selected from the category of a family having suffered a weather-related event, and the Kurtz family from Blue Springs, Mo., which was selected as the winner for the military category.

The before shot of the Phipps’ family’s home. 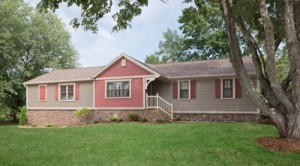 The Phipps home after the renovations.

The Phipps family purchased the house in 2004 with hopes of making repairs and turning it into their dream home, only to have years of weather damage, family illness and expensive repairs deplete their savings and bring their plan for renovations to a halt.

Melinda Kurtz entered to win in honor of her husband Rusty’s 34 years of military service. On his last tour to Iraq, he was injured and also now suffers from post-traumatic stress disorder after multiple deployments. Along with their dedication to the U.S. military, the Kurtz family has also taken in their two nieces in order to give them a better life and safer home.

The Kurtz home after renovations.

Both homes received a full exterior home makeover including windows, siding, stone veneer, railing and designer accents from The Designed Exterior by Ply Gem. The total product prize package for each home is valued at up to $60,000.