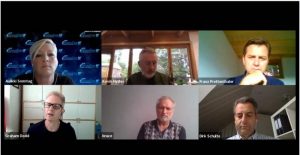 Panelists discuss how the architectural glass industry can have a positive effect on climate change during the Transatlantic Debate.

Nicol began the discussion with Prettenthaler, the event keynote speaker on Wednesday , who noted two of the main impacts that pose the biggest problems throughout the world in terms of climate change. To start, he said, are the changes in the water cycle and flooding happening on coastal and river levels, which lead to flash floods.

“This is something the entire globe will have to deal with and already does,” he said. “The second is the heat island effect that is already damaging the health of people in cities. That is getting worse every year.”

Hydes followed and shared a perspective on creating better cities and urban spaces, and said there’s a collision going on between climate change impacts.

“For the last six months we’ve had COVID; so do we change how we’ve been thinking about buildings, cities and communities to think more about health and less about carbon? Then there is commercial … the economy … [with the] opening and closing of cities, in every industry everywhere there is a massive tension,” he said. “So we want to make sure that climate doesn’t fall off the list [of importance] because at the end of the day nothing is relevant if we don’t have a planet to exist and survive on.”

Relative to glass, Hydes said there is a lot to consider. With a window, for example, he said he wants to be able to close it when the outdoor air quality is poor, but most of the year wants it to breath, generate power, etc.

“Glass is very important. How can we be smarter as individuals, as organizations and as communities, testing what we are doing under these three lenses—climate, commercial and COVID.

Sonntag said that, in the building envelope, there is a lot of potential in active engagement, for example, to harvest energy. This could be, she said, through the material and the integration of the structure. Also, she added, it’s not just the glass, but the holistic structure. As an example, while glazing has gone from double to triple layers, with that has come increased weight of the glass, which means the need for more reinforcement in the building.

“You’ve increased the layers of glass [for thermal performance] … but at the cost of that embedded embodied carbon,” he said, adding that it’s interesting to look at embodied carbon in certain buildings and the incremental operational carbon savings. For example, when you look at the coatings on glass, the pay back is really fast.

Panelists also discussed the life cycle of building materials and the opportunities in renovation and retrofit projects. Hydes gave the example of the Empire State Building retrofit, which happened about ten years ago. The team working on this project built a glass factory inside the Empire State Building and was able to remove existing windows and add the triple layer, which improved performance significantly, as opposed to throwing away the materials.

Nicol asked Shulte about the feasibility of retrofit moving forward. Shulte said while there is a huge potential in retrofit and renovation, it’s also important to talk about the effort that goes into a retrofit. For example, what does it take to actually rip out the existing [windows] and put in a new façade? He questioned if it’s more efficient to spend a year working on a retrofit project or coming in with a new more efficient product.

Sonntag agreed and said depending on how the project is constructed, it can be very difficult to refurbish. It will be important to start thinking more about how the building is designed from the start and looking into the future, to allow easier access for potential retrofit.

Shulte added, “This is a good idea, but it has to be implemented from the first design intent.”

Hydes brought up the point that with so many companies now in a remote work environment, we will likely see massive vacancy rates in offices around the world.

“I think we will see a global repurposing of existing buildings … People aren’t going to want to go back into a building unless they feel some sense of health,” he said, adding that the glass industry will need to to move rapidly to create designs and solutions that can be tools to use with clients. He explained, for example, there will be a need to repurpose and turn these existing office spaces into something else, such as a residential structure.

Shulte pointed back to Hyde’s earlier comment about the , and said what the glass industry really wants is to sell glass as much as possible.

“We just need to come up with more efficient and better products,” he said. “We need to intelligently design them into those buildings.”

He added that it’s also important to educate the building occupants so they understand the benefits that come with new, high-performance windows.

Nicol agreed that it’s important to think about the building occupants because so much of their interior comfort is impacted by the glass.

Dodd agreed that when people feel they have some level of control over their environment, whether that’s ventilation, light levels, etc., it gives them a reassurance. The same can be said of dynamic glass and being able to switch shading and natural sunlight.

Shulte added that it’s not only glazing, but the whole building envelope.

“It’s not only the product that can make an impact, but how it is being manufactured and fabricated,” he said, explaining that if you have a super-efficient fabrication process, which doesn’t consume as much energy, that’s already making an impact on climate change. He suggested there could be potential in creating a label for the façade that shows all of its ingredients and could trace its carbon footprint so you know exactly what it brings to the building.

Nicol wrapped up the discussion, noting that as an industry we’re really at the beginning of learning how to design buildings for the future. How we design these spaces, whether commercial or residential, he said, “glass has an important part to paly and we will develop the idea together, I’m sure.”