I’m really not a newbie to the Fensterbau show held biannually in Germany. I was there in 2014 for the first time, and at the time I was shocked by the sheer size of the event, particularly compared to those in the U.S. But this time I was prepared. This time I knew what to expect. And this time … I was still in awe.

If possible, it seemed bigger this year. It definitely was more crowded, though official attendance numbers aren’t yet available. I know this because my video producer Chris Bunn and I had a terrible time navigating through the halls and trying to get past the people and down the long hallways to our next appointment. 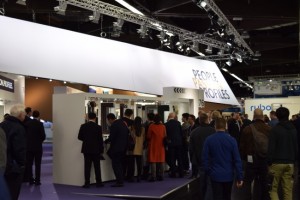 profine representatives said they could feel the excitement from everyone who came by, no matter what country they’re from. They report companies are definitely looking for products that will help them differentiate themselves.

There was also much more participation from those in the U.S. than in 2014. Back then, I remember meeting a window manufacturer from the Bronx, and really, that was it. This year, I can count a dozen U.S. manufacturers in attendance, and those are just the ones I know. Exhibitors told me there were definitely more.

My time was much tighter this year as I was only able to stay for two show days, so here are a few of my observations throughout those jam-packed days.

Another Difference Between U.S. and Europe

We all know there are a lot of differences between the U.S. and European markets. But this one has nothing to do with triples or other physical factors. One company asked me if I noticed that it takes a long period from the time a U.S. door and window company starts thinking about a purchase, then gets all those important factors to fall in line before that purchase is complete. I said yes, that is definitely true, then asked, “Why doesn’t it take that long in Europe?” The answer: it doesn’t. I was told that in Europe, companies make decisions all at once, while in the U.S., a company waits until one item is in place before they tackle the next. This was something I admit I didn’t know.

Most are Excited About the Industry

Really, everyone had this feeling. I can’t remember a time I attended a trade show and heard not one negative comment. Robert Thiroff, chief sales officer for profine, was really excited. “It’s dynamic and I feel it from every single country … All the people looking at these products are genuinely excited about the future.”

Customers are Seeking out Suppliers

A representative for one industry supplier told me he has been trying to talk to a particular person at a major window manufacturing company, but the calls or emails were never returned when product information was sent. But that company was here at Fensterbau and sought out this particular supplier. This shows that when a company is ready, it’s ready. The lesson: keep putting your products in front of potential customers so when it comes time to make a decision they will remember you—but don’t be too pushy.

Latest From the Rumor Mill

I was asked if I had heard that a certain large door and window company would be making an acquisition soon. I hadn’t, and neither of us were surprised that more acquisitions are coming. But the question is who is being acquired, if anyone. Stay tuned …

And My Best Conversation Was …

Hands down, it was with a representative of a major window company, who told me why it is important for them to come to Fensterbau each time. I can’t reveal too many details now, but rest assured this person is smart, forward-thinking and positioning this company for even more growth. I loved listening to him describe how he scours the show looking for trends. And no system can work as is. He takes an idea here, another there and it is all fodder for future product development and sharing and brainstorming of ideas.

I hope when the show returns in 2018 I am more prepared, but at the same time, I hope to be blown away once again by the innovation and conversations.