Survey Says: Many Factors Go Into Your Product’s Perceived Value

The just-released 2019 edition of a popular guide for remodeling projects shows how both raw materials and Realtors can both influence whether a door or window replacement job is regarded as a good value for the money. 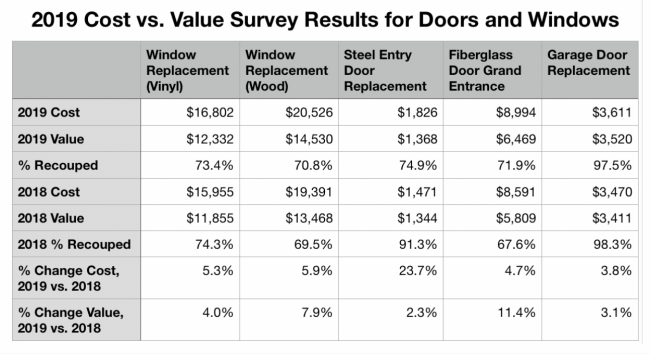 Aside from the fact that both costs and perceived values rose, results varied across the five door and window projects in the 2019 Cost vs. Value project. (See table above.) Among the major changes, the payback for replacing a steel entry door plummeted more than 16 percentage points—one of the biggest falls in recent history—primarily because rising steel prices last year caused the project’s cost to shoot up by nearly a quarter. Meanwhile, the percentage of costs recouped for installing a grand entrance with a fiberglass door went up more than 4 points. This came in large part because the value that Realtors put on the project jumped by 11.4 percent from what they said the project was worth just a year earlier.

Cost vs. Value actually is two projects in one. First, it uses an outside service to collect data on how much it would cost for a pro to do any of 22 common remodeling projects and turn a profit.  These numbers are calculated for more than 100 markets nationwide; the 2019 report gives numbers for 136 markets.

After that, Cost vs. Value’s organizers survey Realtors and other real estate professionals in all of those markets, asking them how many dollars they believe a project would add to the home’s value if it were sold within a year of when the project occurred. The resulting value number then is divided by the project’s cost to deliver a percentage of cost recouped—i.e., how much bang home owners got for the bucks they spent.

Nationally, the percent recouped for the 22 projects ranged from 50.4 percent for a master suite to 97.5 percent for a garage door replacement. The average across all 22 was 66.1 percent, a bar that every door and window project cleared. There probably are three reasons why.

First, improvements to the exterior of a home have tended over the years to outscore projects inside the house—testimony to Realtors’ belief in “curb appeal.” Second, projects to replace something on the home usually outscore additions or new projects. This makes sense, as Realtors will tell you it’s harder to sell a home at a good price when parts of it are broken. And third, given the importance (especially these days) of workers’ hours in determining overall project costs, the relatively simple jobs to do—like replacing a steel entry door—tend to have lower prices compared with the more labor-intensive jobs.

To see a copy of the latest Cost vs. Value report, visit www.costvsvalue.com.