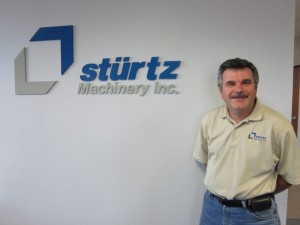 Diaconu earned his engineering degree at the University of Timisoara’s Institute of Engineering in Romania before immigrating to the U.S. He became a U.S. citizen in 2004.

“Marcel is a true success story and an inspiration to all of us at SMI,” said  Stürtz CEO Ellis Dillen. “After going through the political upheaval in Eastern Europe in the late ‘80s and early ‘90s, he applied for and was granted permission to come to the U.S. Like many of our parents and grandparents, he came here with nothing but a strong work ethic and hope for a brighter future. Marcel moved in with a sponsor family in the Cleveland area and, despite his engineering degree, went to work at an oil-change place while he improved his English skills. When Marcel joined Stürtz as a technician on the shop floor, he quickly proved himself to be a dedicated and tireless worker,” continued Dillen. “Once he had a good understanding of our equipment, he moved into the Field Service group. Over the past 11 years Marcel has represented Stürtz with professionalism and dedication. He will be an excellent addition to our engineering team.”

Tags: Ones to Watch, Sturtz