Soft-Lite Windows and one of its dealers, Unique Home Solutions, have offered a joint donation to Honor Flight Cleveland to help pay tribute to U.S. veterans who served the country by providing them a safe and memorable, all-expenses-paid trip to Washington, D.C., to visit the memorials honoring their service. 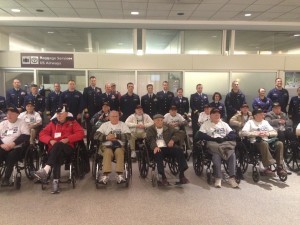 Pictured above, several of the veterans and Guardians arrive at the airport to begin their tour of the war memorials in Washington D.C.

Nine to 10 flights are scheduled annually. Priority is given to World War II veterans; however, terminally ill U.S. veterans who served at any time are also given preferential treatment and assigned to a flight as soon as a seat is available. Korean War veterans fill any open seats. Each veteran is assigned a “Guardian,” a volunteer who makes the trip with them and assists them as needed throughout the day-long trip.

Soft-Lite and Unique’s sponsorship allowed 25 World War II veterans and Honor Flight representatives to make the trip on November 13, two days after Veteran’s Day, making it an even more special trip for all involved. In addition, one employee from Soft-Lite and one from Unique will serve as Guardians on this Honor Flight.

Peter Langan, Soft-Lite’s director of technical services, who has served as a Guardian on a previous flight, represented the company on the November 13 flight. “The men and women who served in World War II are by far the greatest generation that this country has ever had. On July 31, I had the honor of being Guardian for 86-year-old Leonard Rabe, a Navy Veteran,” said Langan. “I told Roy, our company’s president, about the flight and must’ve hit a soft spot, because he teamed up with Bob Dillon of Unique to sponsor the entire November 13 flight! I couldn’t be any prouder to work for such a generous man.”

Honor Flight Cleveland is funded entirely by private donations from patriotic individuals and organizations that recognize the great accomplishments and sacrifices of veterans and have a desire for these American heroes to see their memorial before it’s too late. The extraordinary feat of providing this service has been accomplished solely by volunteers, donating more than 53,000 hours to this important cause.

“We are proud to help support such an important and worthwhile organization as Honor Flight Cleveland,” said Roy Anderson, Soft-Lite president. “Veterans who have served our country, and their families, have made sacrifices most of us can’t even imagine, and I am excited that Soft-Lite can play a role in ensuring these veterans get a chance to see the memorials honoring their service. ”

“I am honored that our company can contribute to a valuable organization like Honor Flight Cleveland,” said Bob Dillon, president of Unique Home Solutions. “I’m pleased that we can help pay tribute to the men and women who have served our country, because they are more than deserving of this experience for the sacrifices they’ve made for all American citizens.”

Click on the link below to watch a video of the veterans arriving at the Baltimore-Washington International Airport.