Six to 9 Percent Growth Predicted for Housing this Year

May 16th, 2016 by Editor
Is construction gaining or waning? That was the question industry economists addressed recently in a spring economic forecast webinar hosted by CMD Group.
In terms of the overall U.S. economy, American Institute of Architects (AIA) chief economist Kermit Baker­ said that despite a weak first quarter, gross domestic product gains are expected to be 1.5 to 2.5 percent for the next several quarters, helped by a strong jobs market.
The construction industry has had a positive hand in the big picture. “The construction sector is back in growth mode and really one of the healthiest sectors in our economy overall,” Baker said. 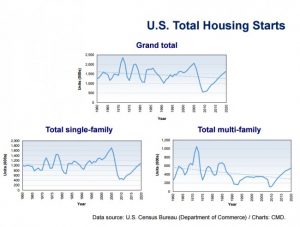 On the housing front, single-family is predicted to see 6-9 percent growth in 2016, according to Ken Simonson, chief economist for Associated General Contractors of America. Ongoing job gains continue to add to housing demand, but student debt and limited supply will cap growth. 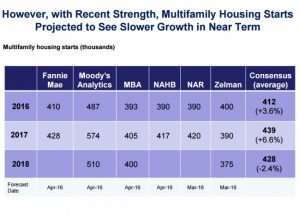 Multi-family will grow 8-12 percent, and nearly all of that comes from rentals, not condominiums. 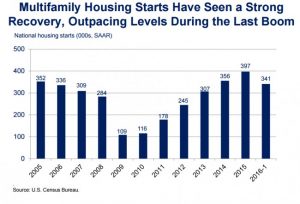 Baker added that multifamily construction will continue to outpace single-family, but that the two will start to converge more in terms of growth. He said multifamily construction levels have been very strong in recent years as the sector continues to see growth in renter households and rising rentership rates. Multifamily construction has increased an average of almost 30 percent per year over the last half-decade.
While single and multi-family are poised for continued growth, Baker did caution there are “a growing list of concerns.” The manufacturing sector has been weak and in a slowdown since last year, and a downturn on the international economic front is affecting U.S. imports.
Meanwhile, challenges in the construction recovery and expansion include a tight labor market in construction trades, volatility in building commodity prices and rising cost of capital. 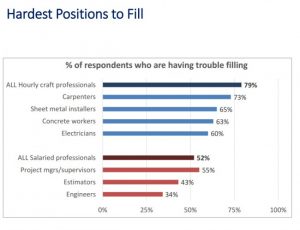 Simonson said nearly all crafts are having trouble filling specialty positions. He added that the downturn in material costs from the last couple years is “probably over, but we won’t see a big upswing either this year or next year.”
In 2016, Simonson projects overall construction spending will be just short of the 11-percent growth from last year.
“The first quarter [of 2016] was a bit weak, but it’s always difficult to gauge the strength of the market in the first quarter,” he said. Looking forward, though, he said the consensus is that multifamily construction levels “will slow down very dramatically in the near-term.”
From 2016-2020, CMD projects yearly total construction percent increases to be as follows: 7.4, 6.3, 5.4, 4.6 and 4.4.