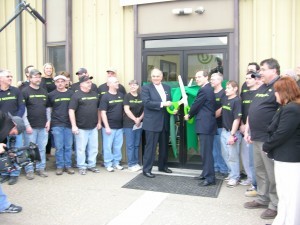 Serious Materials, the new owner of the former Kensington Windows, reopened the Vandergrift, Pa., facility in a ceremony held yesterday. Pennsylvania Gov. Edward Rendell, along with rehired Kensington employees, were on-hand to celebrate the reopening of the plant that closed abruptly in October when parent company Jancor Co. lost its financing and filed for bankruptcy. Approximately 25 former Kensington employees have been rehired to date, including Robin Scott, who spoke with a great deal of emotion yesterday at the ceremony. The company plans to bring other employees back as orders increase.

“You don’t need a Ph.D. to see that factories are fleeing this area,” said Scott. “So I wasn’t that surprised when Kensington closed …. But when they shut this place down it was the worst feeling I ever had.”

Scott added that he hadn’t thought the facility would be reopened under new management. “When I got the call from my friend Chuck (Chuck Wetmore, plant manager) to come back, my response was, ‘when and where?'”

He also joked, “I’m not a tree hugger by any means,” but that he was pleased to hear that Serious Materials, a company focused on energy-efficient windows, was the new owner.

Rendell echoed this sentiment. “I’m not a tree hugger either, but I know that saving energy will be crucial in the next 25 years,” he said.

He also used Kensington/Serious as an example of government at work (referring to the stimulus package).

“The next time you hear someone say government doesn’t work, tell them they are wrong,” he said.

As another example, he pointed to the money allotted to weatherization of homes in the stimulus bill.

“We’ll do training so people learn how to weatherize homes,” he said. “That’s a lot of jobs that will be created.”

Serious president Kevin Surace also spoke at the event and told those in attendance about the company’s commitment to saving energy through its production of high R-value windows. Most windows are R2 or R3, says Surace, meaning half of the energy will be lost from that window.

“Five percent of all the energy in America literally goes out the window and we can change that,” says Surace, who says Serious windows have an R value of 11.

“It’s so gratifying for others to see what I knew when I started this company-that no one does what we do,” he added.

Click on the video below for an exclusive interview with Wetmore.