Approximately 50 members of the door and window industry, including members of the Northeast Window and Door Association, met with Sen. Arlen Specter (D-Pa.) this morning, to discuss issues of importance to them. The top issue on most members’ minds was the looming lead paint regulations, set to take effect on April 22. 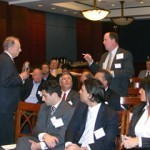 Senator Specter listens to a question from Mike Sugrue of Winchester Industries.

Neither Specter nor his staff energy-focused staff member in attendance, James Warner, was aware of the EPA’s lead paint rule and the corresponding effect it could have on the door and window industry. Both Specter and Warner said they definitely will look into the issue.

“Let’s take a look at this and see if there is something else we can do about this legislatively,” said Specter.

Charles Dorsey of Gorell Windows and Doors pointed out that this is not just an issue for the door and window industry, but the entire construction industry. “This will devastate us,” he said.

Another attendee pointed out that if the consumer can’t afford to replace their windows due to the higher costs this could create, then this new rule could backfire on the consumer.

“Let’s organize all of these issues that are giving you heartburn and see if the EPA can make some accommodations,” Specter added.

After many attendees expressed their views on lead paint, Specter joked, “Anyone have an easy question?

Attendees did bring up other issues related to health care, tax credits and ENERGY STAR.

Alan Levin, president of Northeast Building Products, asked about the healthcare legislation and how this will affect his business. He reported that he just received a 41.6 percent increase in his health insurance plan for his employees.

“That’s why we passed comprehensive legislation … ” said Specter. “The Congressional Budget Offices estimates that we will save $135 billion in health care costs but it won’t be an immediate fix.”

Specter also addressed the stimulus package and the economy in general and said, “I think we have turned the corner.”

Daryl Huber of BF Rich Co., president of the Northeast Window and Door Association, thanked the Senator for the passage of the stimulus act.

“While there were differences of opinion, I think if we didn’t pass it we would have slid into a Depression,” said Specter.

Still, Specter recognized that manufacturers are facing a variety of issues.

“You certainly have a cauldron of problems and I’m interested in you being treated in a fair and equitable way,” he said.

Warner had spoken with attendees prior to Spector’s arrival, particularly in regard to energy efficiency.

Levin asked why U.S. products and am emphasis on “buying American” weren’t tied more closely to the stimulus bill. Wu advised that Specter feels strongly about that provision as well.

“He’s afraid it wouldn’t have passed,” she said. “Some Senators on the other side of the aisle aren’t as in favor of ‘Buy American.’”

Levin also asked about the $500 tax credit given to employers who hire new employees.

“We hire when we need to, not because we are getting a credit,” he said.

Talk then turned to extension of the window tax credit, which she reported the office is looking into.

“We would rather see it [the $500 employee tax credit] go to extending the tax credit,” added Levin.

For more photos from today’s meeting check out DWM‘s page on Facebook.