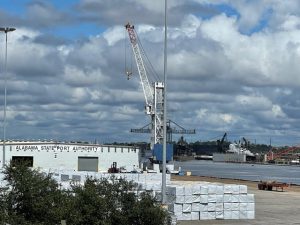 The World Millwork Alliance is addressing supply chain issues among other things at its Annual Convention and Tradeshow, in the shadow of the Alabama State port authority.

The weather was dreary this morning in Mobile, Ala.—a touch cool with light rain—but not severe enough to dampen business. A backdrop of grey skies against local port activities is suiting for an industry that’s overcast with labor and shipping challenges, yet still managing to experience growth and keep things moving.

“The perception is that container loads have backed up and the supply chain isn’t progressing,” said Connor Lokar, senior forecaster for ITR Economics in Manchester, N.H. In reality, port and supply chain activities are up, Lokar said, adding, “It just doesn’t feel like it, due to demand.” 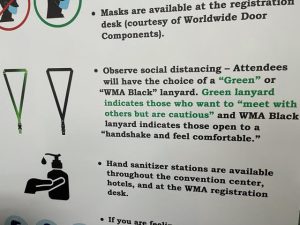 For the second year in a row, World Millwork Alliance is aiming at those issues and others through its Annual Convention and Tradeshow—this time in person in Mobile. As COVID-19 hangs over the event, at registration attendees receive their identification badges and a complimentary mask, after which they’re invited to choose either a black or green lanyard. Black signals “those who are open to a handshake and feel comfortable,” a sign explains. Green is for those “who want to meet with others but are cautious.”

That’s a far cry from the earliest days of the pandemic, suggested Lokar, when, “We were wearing hazmat suits to the grocery store,” he joked.

Lokar’s session, “Planning and Navigating with Assurance,” delved into the economic and business conditions brought on by the pandemic, as show organizers front-loaded the event with seminars to help millwork companies navigate ongoing challenges. Going forward, Lokar told attendees that his firm expects 2022 to be a somewhat uneventful year, but to bring a period of slower growth as the “sugar high” of economic incentives wears off. At the same time, “I’m not doctor death up here this morning,” he assured, immediately clarifying, “We don’t see a recession … we just see things slowing down.” But growth is growth, he pointed out, adding, “That’s an important word to clarify. This will be a statistical normalization … we aren’t going to see things come crashing back down to Earth.”

A slowing of demand could be good news for the supply side of the industry, Lokar explained, as companies are able to play catchup. At the same time, for perspective, it’s important for everyone to remember, “We’re coming off of the highest of highs, in terms of growth rate,” he said. 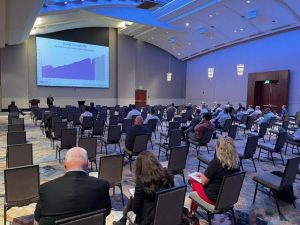 Economic and business conditions brought on by the pandemic were hot topics on everyone’s mind at the WMA’s Annual Convention and Tradeshow in Mobile, Ala., this week.

One area in which companies will have a tougher time recovering includes labor, Lokar and others suggested. For this reason, “Labor force is probably the worse news I have for you this morning,” he said. “It isn’t going to get much better.” The sticking point is participation, he explained. And while the image that comes to mind for some people includes younger individuals, in many cases, “It’s actually the folks over 60,” he said, that are choosing the sidelines. In a period that’s come to be known as “The Great Resignation,” fewer people are choosing to participate in the workforce—including those at or nearing retirement ages, said Bruce Merrifield, of Merrifield Consulting Group in Chapel Hill, N.C. “As you become a richer nation, some people might just say ‘Well, I’ll just retire early,'” he told attendees. Among those who opt to stay in the workforce, many are now reconsidering their current employers.

Meanwhile, younger candidates are accustomed to digital lifestyles and therefore, “They don’t do manual,” he suggested. That could lead some to wonder, “Why not just export those jobs to China?” Merrifield said. “We did that already. And now China is running out of people.”

As a result, more automated technologies and artificially intelligent business tools are a better solution, he said, as companies learn to do more with fewer workers. For example, in the restaurant industry businesses have managed to stay open with fewer servers, he said, many by “decomplexifying,” including fewer items on their menus. As for what that translates to millwork, “In your case, if you’re a distributor, typically you’re going to have a big number of customers that are chronically unprofitable … every customer is a good customer … but you aren’t making money on these people.”

Others will choose to follow a model Merrifield referred to as “paying up,” which includes raising wages and prices to accommodate increased labor costs. But, “That doesn’t necessarily mean you’ll be able to find and hire more people,” he warned. Companies will also need to focus on skill building and upward mobility, in order to draw in and retail workers.