Russell Ebeid, former president of Guardian Glass Group, passed away over the weekend. 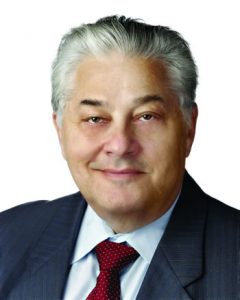 During his tenure with Guardian he worked at all ranks – from maintenance to plant engineering, production manager, plant manager and group vice president – before being named president of the Glass Group worldwide.

Ebeid joined Guardian in May 1970 during the construction of its first float glass facility in Carleton, Mich. After several engineering and manufacturing assignments, he was named plant manager of the Kingsburg, Calif., facility where he was eventually honored as Guardian’s Employee of the Year in 1979.

When Guardian expanded into Europe in 1981, Ebeid’s responsibilities were broadened and he was named a group vice president. Shortly after Guardian became a private company in 1985, Ebeid was named to the board of directors and assumed the presidency of the Glass Group. He also served as chairman of the board of Guardian Europe S.A. and director of Guardian Japan. During his time with Guardian he was responsible for the worldwide glass sales, marketing and manufacturing activities on five continents. He retired in 2011.

Before joining Guardian, Ebeid spent seven years at General Motors Corp., where he served in a variety of engineering assignments as a senior mechanical engineer.

In 2008, he was featured in USGlass magazine’s list of the Glass Industry’s 50 Most Influential People.  He said his heroes were his parents “who were knapsack immigrants who came to the United States without money, language or contacts … Their core values taught us that unselfishness, consideration of others, conscientious service, honesty and measured decision-making were the currencies of life.”

In 2013 he received an Ellis Island Medal of Honor presented by the National Ethnic Coalition of Organizations (NECO) and he has been knighted by several foreign governments.

A legacy film telling the story of Ebeid was produced and directed by Keith Famie of Visionalist Entertainment Productions in 2016. Famie said the local community in southeast Michigan and northwest Ohio, along with Ebeid’s friends and family, “felt it was time to tell his story.”

“He’s a very quiet and reserved person, but he’s accomplished so much and touched so many people through his leadership, philanthropy and outlook on life,” said Famie, who spent a year interviewing many of Ebeid’s friends and colleagues throughout the country.

Philanthropy was an important life focus for Ebeid. He worked closely with ProMedica, among many other organizations, donating millions of dollars to a number of causes.

The family will receive friends Wednesday from 3-7 p.m. and Thursday from 3-7 p.m. with Rosary Service on Thursday at 6 p.m. at A.J. Desmond & Sons Funeral Home, 2600 Crooks Road in Troy, Mich. Funeral Mass will be 10 a.m. Friday at Most Holy Redeemer Church, 1721 Junction Street, Detroit. Visitation at church begins at 9:30 a.m. In lieu of flowers, the family suggests memorial tributes to Ebeid Hospice Toledo or ACCESS of Dearborn.