The R+T 2018 trade show in Stuttgart, Germany wrapped up on Saturday, attracting more than 65,000 attendees who visited 1,027 exhibitors from 41 countries at the Stuttgart Exhibition Centre. 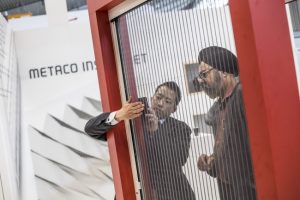 Attendees examine a screen during the R+T show in Stuttgart, Germany.

R+T bills itself as the world’s leading trade show for doors/gates, sun protection systems and roller shutters. According to show organizers, 60 percent of visitors came from countries outside of Germany. In all, they represented more than 140 nations.

“We saw smiling faces on every day of the fair,” said Sebastian Schmid, Department Director of Technology Trade Fairs. “And that applies to both exhibitors and visitors.”

Building automation, energy efficiency, security and convenience were among the top trends at the show, Schmid said. For example, more roller shutters now can be operated automatically and integrated with smart-home controls to protect buildings from intruders and boost energy efficiency.

“Doors and gates are definitely more energy efficient, more secure and more convenient than ever before,” Schmid said. “Visitors to Stuttgart were especially interested in the refined technology of drive systems and wireless systems.”

Among sun-protection products, one notable trend was the combination of strong design and new technology. The focus was also on saving energy. Whether sun protection is on the outside or the inside, the top companies in the industry showed their approaches to greater thermal comfort and energy efficiency, Schmid said.

The trade show also presented the latest information on topics such as automation, façade integration and networked systems.

“What clearly emerged was the diversity of designs and constructions which open up entirely new creative opportunities in planning and implementation,” Schmid said.

There weren’t many companies at R+T that are familiar to the U.S. industry, but a few did have booths.

Decoral System showcased its wood-grain powder coating technology at the show. Fakro, whose U.S. offices are in Addison, Ill., displayed several skylight systems. And Saint-Gobain ADFORS, a manufacturer and supplier of insect screen fabric used by both DIY and professional customers, had a booth at R+T as well.

Later this month, Germany will host another major show for the construction industry — Fensterbau. The world’s largest exhibition for doors and windows is held every two years in Nuremberg. This year’s show is scheduled for March 21-24. DWM will be there to cover the show.