Roto Frank of America Inc. presented a check to the Connecticut Department of Veterans Affairs on September 27 at Roto Rrank’s regional headquarters in Chester, Conn. 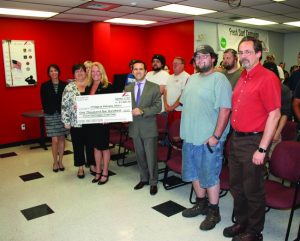 Chris Dimou, president and CEO, Debra Keever, vice president and CFO, and Sue LeMire, HR/general accounting manager, made the presentation on behalf of Roto Frank to Tammy Marzik, manager of community outreach and advocacy with the Connecticut Department of Veterans Affairs, Office of the Commissioner.

“We’re extremely grateful to Roto Frank of America for their generous donation to the Connecticut DVA. We wouldn’t be able to provide the services to Connecticut’s veterans that we do without the support of organizations like Roto,” said Marzik.

“We’re pleased to be able to contribute of the worthwhile efforts of the Connecticut DVA as they serve the needs of veterans in the state,” said Dimou.

The funds were raised during an employee campaign that ran during 2016-2017. After identifying five local charities, employees voted to select the Connecticut Department of Veterans Affairs as the recipient of their campaign efforts in 2016-17. Employees voluntarily elected to make donations via payroll deduction, as well as supporting a variety of fundraising events, such as a taco lunch and a 50/50 raffle.

In addition to the money raised by employees, Roto Frank of America staff also collected and donated 25 cases of bottled water for the Connecticut Department of Veterans Affairs Stand Down event held on September 23, 2016.