As the nation sees an increase of natural disasters leaving the communities in their paths’ with billions-of-dollars’ worth of damage, several organizations are making an effort to reduce these costs through resilient building tactics.

In working with the International Code Council (ICC), the NMIS lays a heavy emphasis on encouraging and enforcing current building codes and practices specifically those outlined in the 2018 International Residential Code (IRC) and International Building Code (IBC). 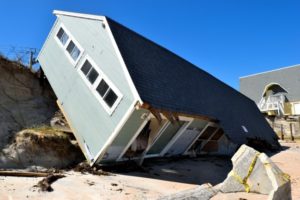 Some of the after-effects of Hurricane Irma.

The strategy for achieving this as outlined in the NMIS includes educating communities to the mitigation benefits of current codes and supporting organizations that do the same. In addition to this, the NMIS wants to partner with experts to provide code administration to building projects after disasters and financial incentives for businesses that adhere to rebuilding with current codes. Another action proposed called for federal and state grant programs to require up-to-date codes to be followed, which ICC says is currently only required by the Federal Emergency Management Agency (FEMA).

Code enforcement and encouragement also echo the efforts of the strategic plan laid out by FEMA, who chairs MitFLG and worked closely on the development of the NMIS. The FEMA strategy states that “up-to-date building codes help communities survive, remain resilient, and continue to provide essential services after a disaster occurs.”

Citing a study by the National Institute of Building Sciences (NIBS), the strategy pointed out that every dollar invested in adhering to current building codes yields a national benefit of $11. However, it is up to states and communities to adopt codes and only 32% of disaster-prone jurisdictions have agreed to follow disaster-resistant building codes, according to FEMA’s Building Science Branch.

Some of the requirements for door and window building regulations under the IRC are windborne debris protection, resistance to a specific wind load, impact protective systems-tested and multiple energy-efficiency regulations.

MitFLG was organized by the Post-Katrina Emergency Management Reform Act of 2006 and is tasked with the coordination of the NMIS implementation, which they say is the whole community’s responsibility.

“The adoption and application of current codes is the foundation of community resilience, but with close to two-thirds of communities facing disaster risk on outdated codes, we have our work cut out for us,” says Sims.