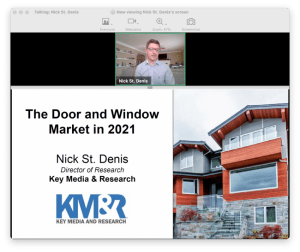 Amid the welcoming remarks for its Spring Committee Meeting this week, officials for the National Fenestration Rating Council (NFRC) predicted continued increases in the market for doors and windows. That message was echoed Tuesday in a fenestration market outlook provided by Nick St. Denis, director of research for Key Media and Research ([DWM]’s parent company). While door and window companies faced challenges in 2020, overall, the new construction and replacement markets held strong, St. Denis said, and are expected to continue to do so in the year ahead. The Southern region of the U.S. will remain a key factor, he said, where the largest gains appear in the new residential market. Meanwhile, supply chain issues and the cost of products led more companies to decrease their growth estimates in 2021, but rising values for door and window projects could help.

While the multi-family sector led an economic recovery from the Great Recession, the opposite is true amid COVID-19, St. Denis said, when the single-family construction and renovation markets have held strong amid a pause in commercial building. Overall, a 5% increase in residential starts is expected for 2021, he said, with the Southern region remaining a key market. In the years surrounding the Great Recession, the south held 50% of market share for new construction, but that number has grown to 55% according to 2018-20 data.

“That’s obviously due to overall population growth, but also from people moving south from other regions,” he said. “The Northeast and Midwest are losing share. That’s an indicator for demand among doors and windows used in new construction, but it also tells us that there’s probably a lot more activity in replacement within those regions, due to more existing homes being purchased.”

Overall, the replacement market has shown steady increases from the fourth quarter of 2018 to the present, including a near 4% increase in 2020, despite COVID-19. That trajectory is expected to hold throughout 2021, he said. Combined with demand from new construction, both markets have door and window companies predicting continued growth, though slightly less than what they expected from prior years.

Ahead of the pandemic, over half of the dealers and manufacturers surveyed by KMR said they expected sales to increase in 2020. At the end of the year, a new survey showed that half saw increases of 10% or more, while another 23% saw increases of less than 10%. In the early weeks of 2021, ongoing challenges led some to question their outlooks, KMR’s data shows, but with inflated demands the vast majority said they still expect to see increases.

“Entering the year in 2019, 85% had favorable views of the current business environment,” St. Denis said. “That basically held true almost identically in 2020, when there was a lot of optimism throughout the industry.” But those measurements were taken ahead of COVID-19, he said, and the results of a presidential election that had many on edge. As a result, “Entering 2021, things were a bit less positive, with 40% of dealers and manufacturers viewing the current business environment as favorable, while another 33% viewed it as somewhat favorable.” A decrease in the number of companies viewing the business environment as “favorable,” from 85% in 2020 to 73% in 2021, is “something to note,” he said, but “isn’t necessarily alarming, because things are still viewed as positive.”

Over the seven years that St. Denis has covered the fenestration industry, sentiment has remained largely positive—so much so that, “It felt like cruise control,” he said, adding, “I think that last year made everyone pause a bit … but fortunately the businesses we talked to were able to innovate and find ways to maintain.”

In early 2021, 74% of dealers and manufacturers said they still expected increases, though more now predict that those improvements will fall short of 10%. Overall, expectations are in line with predictions for door and window sales within the new construction market, St. Denis pointed out, which are expected to increase by around 6-7%. Meanwhile, replacement is expected to grow by 3-4%. “We can be pretty confident that these numbers are strong and that this is what should be expected going forward,” he said.

As the market shows a willingness to pay more for door and window projects, companies could see slight increases in their per-project revenues. Data from 2010 through 2020 shows a 31% increase in the average expenditure for door and window projects, St. Denis said, with the average in 2020 falling at around $3,750. With that in mind and despite recent challenges, “The industry is definitely trending in the right direction and is in a very strong position, compared to the overall economy,” he said.

For a more detailed look at how the door and window industry is expected to play out in 2021, see Key Media & Research’s “2021 Door and Window Industry Outlook.”