Labor activist Melvin “Ricky” Maclin, who led a six-day sit-in at Chicago’s Republic Windows & Doors factory in December 2008 that grabbed international headlines, died on May 5, weeks after being diagnosed with stage four pancreatic cancer. He was 61. 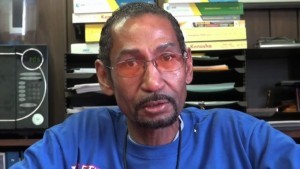 “This is a huge loss for me and for our movement,” United Electrical Workers (UE) Local 1110 President Armando Robles said in a statement. “He leaves a huge hole in our lives. He was a great
friend and a brother in struggle.”

In early December 2008, Maclin, who was vice president of UE’s Local 1110, noticed that Republic’s machinery was suddenly being loaded onto trucks and shipped away, according to the Chicago Sun-Times. Not long after, Maclin and his 250 colleagues learned they were about to lose their jobs and wouldn’t get severance pay, so he organized a sit-in.

The peaceful demonstration drew global media attention – and a flood of supportive politicians.

President-elect Barack Obama spoke out in support of the workers, the Sun-Times reported. “When it comes to the situation here in Chicago with the workers who are asking for their benefits and payments they have earned, I think they are absolutely right,” Obama said during a press conference.

Then-Illinois Gov. Rod Blagojevich showed up at the plant to back the strikers — the day before he was indicted on corruption charges, according to the Sun-Times.

Employees eventually received a layoff package worth $1.75 million. In 2012, a startup company, Serious Energy, bought the factory and reopened it, but later decided to close it. Maclin then led another sit-in, which inspired the workers to band together to buy the plant’s equipment and start New Era Windows Cooperative, an employee-owned company that manufactures vinyl windows in a refurbished Campbell’s Soup factory in southwest Chicago.

Republic Windows’ owner, Richard Gillman, was arrested in September 2009 on fraud charges. In 2013, he pled guilty to stealing more than $500,000 from his own company and was sentenced to four years in prison.

But as Crain’s Chicago Business reported in June 2014, “he’s not spending his days — or nights — in Stateville Correctional Center.” At the time, Gillman was on work release as the marketing director at Archway Construction Co., a Chicago remodeling firm.

DWM spoke to Gillman by phone on Tuesday. He said he’s fulfilled the conditions of his work-release program and is now employed full time by Archway Construction.

A search of the Illinois Department of Corrections site confirms that Gillman was paroled on April 24, 2015.

The news of Maclin’s death comes a day after the UI Labs Digital Manufacturing and Design Innovation Institute (DMDII) opened a research facility for high-tech manufacturing in part of the former Republic Windows plant, which DWM toured in 2003.