Quaker Says Expansion is a Necessity 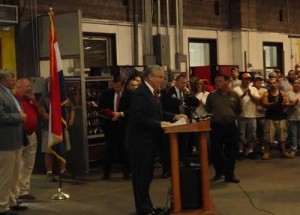 While not many companies are expanding right now, Quaker Windows in Freeburg, Mo., is one that plans on spending an estimated $11 million, over a five-year period to expand its operations.

Phase one of the plan includes replacing Quaker’s current paint area with a paint facility housed in a new 105,000-square-foot building. This expansion will also free up 45,000 square feet of manufacturing space where the existing paint line resides today. This space will be utilized to expand the company’s impact-rated products.

Phase two, which is scheduled for 2013/2014, is a 200,000-square-foot building expansion that will allow Quaker to expand all door and window product offerings in vinyl, wood and aluminum. Upon completion of both phases, the company expects to create 95 new jobs.

The announcement prompted Missouri Governor Jay Nixon to visit the manufacturing facilities of Quaker Window Products last week and congratulate the company on this project.

Quaker Window Products vice president and general manager Mike Knoll, along with Quaker’s department heads, spent approximately 15 minutes with Governor Nixon. Nixon then spoke to its more than 400 employees, thanking them for their hard work and urging them to keep competing in what has become a global economy.

“We are committed to fighting every day, to keep our economy moving forward,” said Governor Nixon.

“We appreciate Governor Nixon taking the time to congratulate us,” said Knoll. “Our plans to expand are obviously not the norm right now. But in order for us to grow as a company, expansion is a necessity. This industry is ever-changing. New standards are being implemented yearly and if we don’t keep up with these changes, we’ll be left behind.”