Positive Vibes All Around at GBA 2016 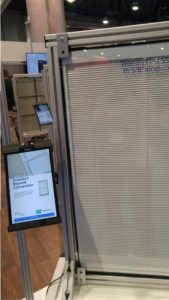 Innovia by Intigral showed off a variety of new innovations in blinds. Among these is a product that the company says is “the world’s first SSLT in a 5/8-inch airspace.”

GlassBuild America opened yesterday with first-timers, old-timers and everyone in between. All were there to talk to attendees about how to improve their businesses, whether it’s through new innovations or other methods.

When the doors opened a few exhibitors described it as “frenetic.”

“We were busy as soon as the show opened,” said Brad Begin, president at Alpen. For this first-time exhibitor the show “was better than expected.”

The company’s new R10 window generated the most excitement. “People like seeing something new and unique,” he added. (For more on this product look for DWM’s November issue which includes its annual Green Awards).

Another first-timer was Intigral—but this was the company’s first foray at any show—ever. Innovia by Intigral showed off a variety of new innovations in blinds. Don Smith, vice president of operations, unveiled a product that he says is “the world’s first SSLT in a 5/8-inch airspace.”

“We are showing off a lot of functions that don’t exist in the blind world,” he said. These include self-leveling blinds, ones operated by a remote control and pleated shades inside the blind. The latter is big internationally and Smith said the company is working to bring this to the states.

“We received hundreds of leads on the first day,” he said.

There was more good news at the Linde booth. Tom Gallagher explained that in the communication/satellite industry, use of xenon is skyrocketing. 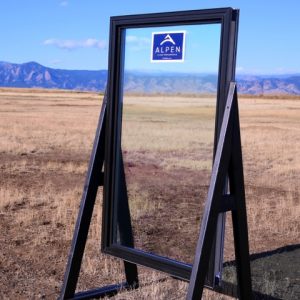 But Gallagher says he is here at the show to present new pricing so that may change “once they get wind of this,” he said.

Tony Smith, president at Smith Case, talked to customers about its custom cases but also about the sales tools it offers which demonstrate the low-E  and energy-efficient properties of the glass.  He also had great news for his company and the industry when it comes to marketing. “All our customers are doing more in marketing,” he said. “Our customers are confident and spending more money in these areas.”

Machinery companies, including Joseph Machine, are at the show in large numbers. Sanjay Parikh, general manager, talked about some industry trends. “There’s a bug push in the industry for material savings and that’s where our machines come in,” he said.

GlassBuild continues through Friday. Stay tuned to dwmmag.com for more news from the show.