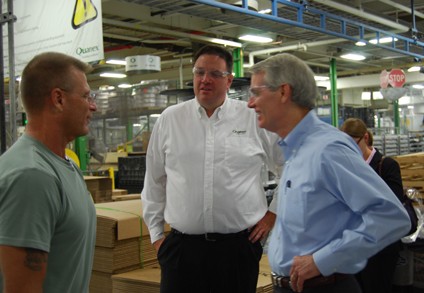 “Quanex is excited to host a U.S. Senator who is helping lead the push for energy efficiency at a national level,” says Ric Jackson, director of external affairs for Quanex Building Products. “His bill would be the first major piece of energy legislation taken up by the Senate in years, and Quanex is proud to support this initiative. In addition, Senator Portman has been supportive of Quanex’s federal priorities and concerns. Ohio’s energy economy, including those companies producing energy-efficient products like Quanex, have a champion in the Senator.”

Earlier this year, Portman introduced the Energy Savings and Industrial Competitiveness (ESIC) Act with U.S. Senator Jeanne Shaheen (D-N.H.). The legislation, currently under consideration on the Senate floor, offers a deficit-neutral framework designed to promote the transition to a more energy efficient economy while driving economic growth and encouraging private sector job creation. This bipartisan bill uses a variety of low-cost tools to reduce barriers for private sector energy users and will drive adoption of off-the-shelf efficiency technologies among the largest energy consumers.

“By making it easier for employers to use energy-efficient tools, we are helping them to reduce their costs, enabling them to put those savings toward expanding their companies and hiring new workers,” says Portman.