Political Outcomes Not Expected to Sway Demands for Housing

Door and window manufacturers were assured this week that the result of a presidential election should have minimal impact on demands stemming from housing. But that didn’t stop the Window and Door Manufacturers Association (WDMA) from delving into the election as part of the lineup for its virtual fall conference. The keynote session Wednesday focused on the possible outcomes—not only for the presidential race, but also the Senate and House—followed by discussions about how politics could impact the economy. 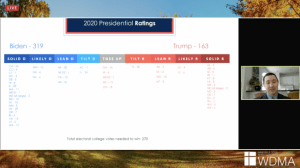 This year’s presidential race follows a different pattern than prior elections, suggested Nathan Gonzalez, CNN political analyst and editor and publisher for Inside Elections with Nathan Gonzalez, as both candidates have forgone typical polling and campaigning measures. Instead, they’re “locked into” their plans, he said, adding, “Now we just wait.”

Following a 2016 election that left most political analysts backtracking their forecasts, Gonzalez poked fun at the idea for having someone make those predictions over again, but went on to say that he expects Joe Biden to win. At the same time, he added that—based on the results of 2016—it’s virtually impossible to “count Trump out” until the votes are tallied. With or without a win, Gonzalez said Trump should be credited for producing what is expected to be one of the strongest turnouts in history, after driving participation among voters for both parties.

In Senate and House races, Gonzalez said he expects voters to follow party lines, as “There’s a decreased appetite for ticket splitting.” In order for Democrats to control the Senate, they’ll need to secure three seats, he said, adding, “I think Democrats’ most likely range includes winning four to six seats.” Meanwhile, “In every scenario I can imagine, the Democrats maintain control of the house,” he added.

In an election that draws staunch supporters out of both parties, Gonzalez acknowledged that his predictions were likely to upset some of WDMA’s attendees. “If I haven’t made you upset already, I have a couple more points,” he said, before moving into numerous suggestions for what to expect the morning of Wednesday, November 4.
First and foremost, you shouldn’t expect the election to be over, he said, as it might take longer than usual to count the nation’s votes. Those delays could stem from massive voter turnouts, he said, but also “A lot of states aren’t equipped to count them efficiently, so it could take a couple more days or even a couple more weeks to count all of the ballots.” Gonzalez said he also expects there could be lawsuits “all over the country,” over which ballots should be considered valid. “I have found that the one thing we should all be rooting for in this election isn’t a party or a person, but clear results,” he said. “We should all be rooting for a clear winner and a clear loser … that’s what it’s going to take to move the country forward … otherwise, one party is going to walk away declaring it illegitimate.”

Political sentiment spilling out of election results could have everything to do with how the economy is affected going forward, said Kermit Baker, chief economist for the American Institute of Architects (AIA). “Obviously, a big issue we’re dealing with now is the election’s impact on the economy,” he said. “But that’s a complicated issue, due to so many unknowns and what the mood will be after the election.”

Some of the biggest factors hanging in the mix include whether or not there will be another round of economic stimulus, Baker said, along with how taxes and regulations pertaining to climate change are handled. Regardless of political outcomes, his research points to a continued, slow recovery across most areas, with one exception: housing.
While the commercial construction industries face what will likely be a tough year in 2021, Baker said that even with the pandemic, residential housing has seen improvements over the year, bringing demand back to robust levels. As such, “Housing is not only important for the construction sector, but housing has always led the economy out of recessions,” he said. Housing starts are at their highest pace since the Great Recession, added Casey Olson, senior industry analyst for Principia Consulting. As a result, demand for doors and windows “has rebounded more quickly and stronger than anyone expected,” Olson said, as “New homes are being bought as soon as they’re up.” That phenomenon has brought about a rare change for housing statistics, explained Matt Ritchie, director of quantitative analysis for Principia Consulting. While there is usually a gap between the number of housing starts and the number of sales among single-family units, currently they’re at the same level.

“Really the only other time we’ve seen this is at the very trough, following the Great Recession,” Ritchie said, indicating that—at the present, at least—new construction is failing to keep pace with demand for housing in general.
While a backlog of demand for new homes has lingered in recent years, the dilemma has worsened, all but guaranteeing that builders will remain busy for the foreseeable future.

In order to supply new construction with doors and windows, manufacturers will have to contend with supply chain issues and a producer price index that’s steadily increasing, Ritchie said, but door and window companies agree that beats the alternative.