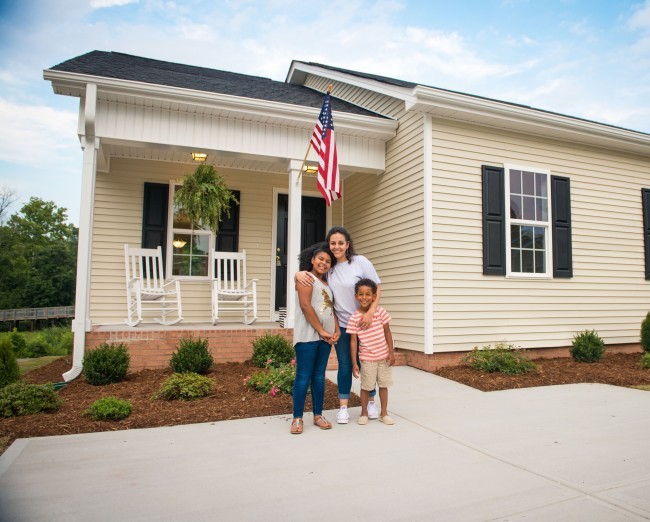 New homeowners in Raleigh, N.C., happy to receive their new house keys. One of the nearly 500 homes built or remodeled through product donations by Ply Gem as part of the company’s Home for Good project. (Image: Ply Gem)

Rising country stars Jon Pardi and Lauren Alaina have been declared ambassadors for the 2019 Ply Gem Home for Good project. The project pairs with Habitat for Humanity, an international, nonprofit organization dedicated to affordable housing, helping to build homes across the U.S.

“I partnered with Ply Gem and Habitat for Humanity last year on several homes in Cleveland, Ohio, and I was able to be there to help welcome the families into their new homes,” says Alaina. “I think I was just as excited as they were! It was so special and I’m looking forward to doing even more this year.”

Officials for Ply Gem say the company’s commitment to the belief that everyone deserves a place to call home aligns with the artists’ desire to give back.

“I grew up in a community where neighbors helping each other is just how it’s done,” says Pardi. “So, when the opportunity came up to work with Ply Gem and Habitat for Humanity families, it was an easy decision—Absolutely! Let’s go help build some houses!”

Since 2016, the Home for Good project has provided building products through a total donation, in value, of more than $2.3 million to Habitat for Humanity.

Ply Gem supports the project through advertisement and social media initiatives, encouraging its employees, consumers, distributors, builders and remodelers to support the company’s effort to bring solutions, while raising awareness of the need for affordable housing in communities across the country.

Pardi and Alaina aren’t the first country stars to be involved with the program. The Home for Good project started with Alan Jackson, in 2016, and extended to Darius Rucker in 2017-18.

“By donating the quality products we manufacture—like windows and vinyl siding to Habitat for Humanity—we’ve helped to build nearly 500 homes in 90 neighborhoods,” says Jim Metcalf, the company’s Chairperson and CEO. “We are committed to helping to make home ownership a reality for those in need of affordable housing and we are passionate about contributing to communities where people live, work and play.”