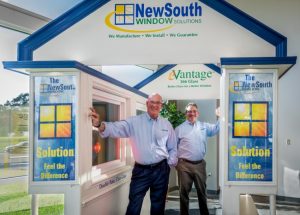 NewSouth president Earl Rahn (left) and CEO Dan Ochstein (right) have arranged to sell their business to PGT Innovations in a $92 million deal.

In a $92 million deal that’s expected to close in the first quarter of 2020, officials for PGT Innovations (PGTI) announced today that their company will acquire Tampa, Fla.-based NewSouth Window Solutions LLC. The move capitalizes on the plans of both companies, officials suggested—PGTI through market acquisition and NewSouth by propelling existing expansion plans. The move is also expected to form a viable strategy for NewSouth owners, as they weigh an exit plan. Officials for NewSouth told [DWM] they’ve been eyeing such a deal for around the past year.

Along with market share, officials for PGTI cite NewSouth’s successful direct-to-consumer marketing and sales channels and “extensive brand awareness throughout Florida” as key factors in the deal. At the same time, the acquisition introduces a vastly new model to PGTI’s portfolio.

“This is a brand-new channel for them,” NewSouth president Earl Rahn told [DWM]. Regarding distinctions between the two companies’ operations and branding, “NewSouth is going to continue as NewSouth, and PGTI is going to continue as PGTI,” Rahn said, including the retention of NewSouth’s existing manufacturing facilities, sales channels and showrooms, he added. Rahn also confirmed that NewSouth employees will remain with the company.

In a conference call posted earlier today, PGTI CEO and president Jeff Jackson said his company expects to benefit from NewSouth’s preexisting channels, which he said are designed to market directly to consumers in lower price-point homes. Most of NewSouth’s sales, he said, are targeted at replacement and smaller orders. As a result, officials said they aren’t expecting cross-up between both companies’ existing sales.

“NewSouth markets directly to the consumer, which we view as creating sales potential that is incremental and complementary to our existing dealer network,” Jackson explained. In what seemed to be a further assurance to the company’s dealers, Jackson also said that market research obtained by his company indicates that once customers have established a preference for how they purchase windows, they tend to stay within those preferred channels.

With eight retail showrooms located throughout Florida and an additional showroom in Charleston, S.C., “NewSouth is expected to aid us in the expansion of our geographic footprint,” Jackson said. “Importantly, expansion plans for NewSouth retail store locations are targeted primarily in coastal areas in the south, outside the state of Florida, which aligns with our overall diversification strategy.”

With existing plans underway to add locations as far north as Virginia Beach, Va., and as far west as Houston, “Now we have a partner to help us get there quicker,” Rahn said.

Rahn confirmed with [DWM] that PGTI was one of just many parties his company spoke to while weighing a buyout over the past year. Co-owned by founders Dan Ochstein, CEO, Earl Rahn, president, and Amy Rahn, vice president of marketing and advertising, “Dan and I have done this for almost 60 years between the two of us,” Rahn said. “We’re closer to the 70 [years old] side than the 60 side and we decided this was a good time to start talking to people,” he explained. “The other thing we recognized, what everyone brought to our attention is—we’ve been in a very hot sector,” Rahn explained. “There have been a lot of acquisitions and mergers, and purchases, and we thought it was time to stick our toe in the water.”

After weighing numerous options, “We felt that they were the best partner for us going forward,” Ochstein said. “They’re encouraging our growth and we’re staying on. No one is leaving. They’re just going to assist us in continuing our growth forward.”

Ranked consistently among [DWM]’s Top Dealers, officials for NewSouth reported earlier this year that their company managed to carve out more than $100 million in revenues in 2019, marking a more than 150% increase since 2016. The company is expected to achieve net sales for 2019 of approximately $82 million to $85 million and earnings before interest, tax, depreciation and amortization (EBITDA) margin in the mid-teens, said Sherri Baker, senior vice president and chief financial officer for PGTI. Meanwhile, “By leveraging PGTI’s size and scale on raw material purchases and applying efficient practices to NewSouth’s production operations,” the deal is expected to craft an additional $2 million in benefits, PGTI’s announcement suggested.

The acquisition gathers two companies separated by just 75 miles, Rahn pointed out. NewSouth’s leadership is committing to “another three to five years,” he said. “And if we’re having a good time and feeling good, we’ll continue beyond that.”

Utilizing cash on hand plus an additional $50 million in long-term debt, officials for PGTI report that there are no remaining obstacles expected for the deal. The HSR waiting period (required by the Hart-Scott-Rodino Antitrust Improvements Act) has expired, nor is obtaining HSR approval a requirement for closing.