PGT Innovations was recently named to Forbes’ latest list of Best Small-Cap Companies for the second year in a row.

The complete list includes 100 U.S. companies across a number of industry categories. This year, PGT Innovations was ranked number 79, an improvement from last year’s rank of 87. The manufacturer was one of two Florida companies on the list and one of nine firms in the Construction classification. 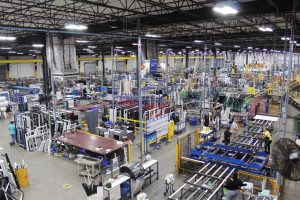 PGT Innovations has around 2,500 team members at its North Venice-based headquarters.

“This recognition is a true testament to our dedicated team of talented professionals who drive our business forward on a daily basis,” said Jeff Jackson, president and CEO of PGT Innovations. “Our folks have persevered through challenging times with integrity, grit and passion for the business, propelling PGT Innovations to great success as the leading window and door manufacturer in Florida. We are incredibly thankful to be able to continue to grow our business and be acknowledged with this ranking.”

To produce its ranking of America’s 100 Best Small-Cap Companies, Forbes used data from FactSet to screen more than 1,000 companies with a market value between $300 million – $2 billion and found 509 companies that had positive sales growth over the past 12 months and a share price of at least $5. The top 100 ranking was based on earnings growth, sales growth, return on equity, and total stock return for the latest 12 months available and over the last five years.

PGT Innovations is the largest private employer in Sarasota County with approximately 2,500 team members at its North Venice-based headquarters.