Florida-based PGT Inc. is celebrating its 35-year anniversary with the highest annual sales in the company’s history. According to a recent press release, its sales surpassed $372 million this week.

On November 30, 2015 the company announced it entered into a definitive agreement to acquire Orlando, Fla.-based WinDoor Inc. for approximately $102 million. WinDoor’s 2015 revenues are expected to be approximately $41 million, according to the release.

“The acquisition of WinDoor is in alignment with our long-term strategy to acquire additional brands or products that have a premium position,” says Jeff Jackson, president and CEO. “The WinDoor acquisition is ideal because it immediately adds top line sales, improves EBITDA margins and ultimately will achieve synergies. For these reasons, I am confident this transaction will be good for our customers and increase shareholder value.”

The acquisition of WinDoor will immediately add to PGT’s earnings on an operational basis as its earnings before interest, tax, depreciation and amortization margins range from 20 to 22 percent. The timing of bottom-line accretion will be determined by the final cost of financing and amortization of purchase price intangibles but is expected in 12-18 month’s time.

PGT is also in the “final phase” of a multi-year enterprise resource planning (ERP) implementation.

According to the company, this is expected “to substantially improve the management of in-process raw materials” which will include automating the company’s multi-facility functions for handling materials and streamlining business management processes and operations.

According to a chart provided by the company, ERP implementation is completed for its support departments and main glass processing, but it has a ways to go on insulating glass and assembly:

Source: PGT
During the first phase of the ERP implementation, all support departments, such as accounting, were moved into the new system in advance of the three primary manufacturing areas. This happened by September 2012.

The main glass processing portion of the implementation, which includes cutting, laminating, and tempering, has been completed and fully operational since January 2015.

The insulating glass portion is responsible for supplying glass to all assembly lines, including vinyl and aluminum, in specific sequencing. All supply for vinyl assembly has been converted to the new system, and a portion of aluminum assembly has.

“The balance will be gradually converted over the next one to two quarters,” the release reads.

This implementation was not without its difficulties, which impacted third quarter operations, but they “have now been resolved.” As proof, PGT provided the following metrics in its release: 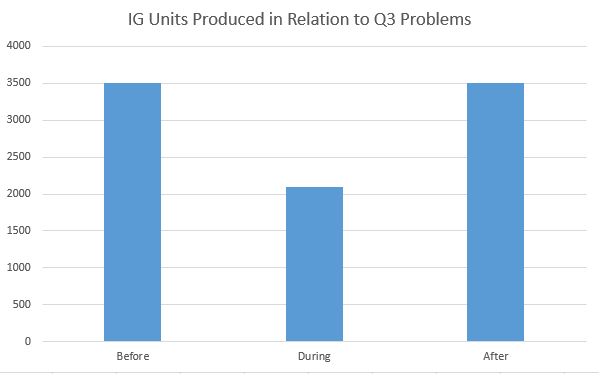 “The vast majority of the implementation is complete, and we have established successful performance in each functional area,” says Brad West, chief financial officer. “We are confident that we can manage the remaining implementation without significant risk to the business or our results.”

According to the release, the company expects a year-over-year increase of 6 to 9 percent for the fourth quarter of 2015.

The company listed other key specifics to support that projection: