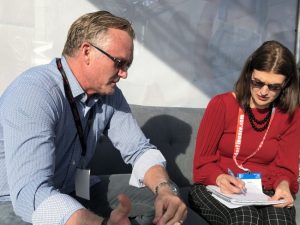 Jeff Jackson, PGT Innovations president and CEO talks with me at the International Builders’ Show.

When attending the International Builder’s Show earlier this month in Las Vegas, I was lucky enough to spend time with some of the team members from PGT Innovations, including Jeff Jackson, President and CEO of PGT and all its brands. We talked about what’s next and whether or not there’s more growth in store—including beyond Florida.

First, some kudos, as the company is celebrating its 40th anniversary this year. As it commemorates its founding, officials are also looking to the future with acquisition after acquisition—the latest being NewSouth Windows and Doors, also in Florida. The acquisition became official yesterday.

“One of the beautiful parts of NewSouth is it gets us into that retail business and we can take advantage of their unique marketing strategies,” said Brent Boydston, corporate sales, marketing and strategic Purchasing for PGT Innovations. “It’s the definition of a synergistic acquisition.”

Boydston added, “So we have our heritage but we are reinvesting every few years with an acquisition.”

One of the executives of its latest acquiree, Amy Rahn, co-founder of NewSouth, and senior vice president and chief marketing officer of Florida for PGT Innovations, was at IBS as well and joined in on the conversation.

“This news requires a shift in thinking and sharing of resources for both PGT and NewSouth dealers,” said Rahn.

“The day of the announcement we had the top 19 dealers identified and were explaining the benefits to them,” added Jackson. “Florida is a huge market. Our intention is to build alliances. Imagine how strong we can be together.”

Jackson then used a popular cliché to illustrate the point that PGT must now back up those intentions.

“The proof is in the pudding, he said. “We have to show them now.”

Rahn interjected, saying that for NewSouth “over communicating was the strategy. The NewSouth employees got it right away,” she said.

PGT had a booth in the show village for Western Windows, an Arizona-based company acquired by PGT in July 2018. I asked if more acquisitions outside of the Sunshine State are on the horizon and for Jackson it was a definitive yes.

“There will be more expansions outside of Florida,” he said, “and we will continue to expand Western’s brand.”