On Tuesday, North Carolina Gov. Roy Cooper announced that Pella Corp. selected Reidsville, N.C., to house its newest vinyl door and window manufacturing operation. The company is expected to invest $20 million into the project, which is also expected to create 124 new jobs in the region. Over the next 12 years, the operation is projected to grow the state’s economy by $247 million, a press release from the governor’s office stated. 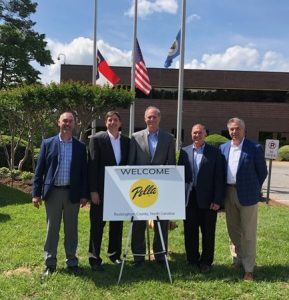 Pella will use an existing 150,000-square-foot facility to produce and distribute doors and windows, while serving the company’s customers across the southeastern region of the U.S.

“We continue to see incredible growth in our 250 series vinyl product line and recognized an opportunity to meet our customers’ needs in the southeast by adding a dedicated manufacturing facility to service this market,” said Tim Yaggi, Pella Corp. CEO.

The new operation also is intended to increase Pella’s production capacity to support the company’s four existing vinyl facilities across the U.S., officials said. Based out of Pella, Iowa, the company has 16 manufacturing locations and employs an estimated 7,000 people.

Once the Reidsville facility is fully operational, the company expects to have 124 employees with an average salary estimated at $41,648, above the county average of $35,401, the governor’s office said. The company plans to begin hiring in the fourth quarter of 2019.

“In North Carolina, we’re proud of our manufacturing expertise and our skilled workforce that helps companies thrive here,” said Gov. Cooper. “We’re excited to welcome Pella to Rockingham County and know they will find talented North Carolinians ready to get to work.”

Reidsville has a population of about 14,200, while Rockingham County has a population of nearly 92,300. According to estimates from the U.S. Census Bureau, manufacturing is among the leading sources of employment in both Reidsville and Rockingham, after the education, health care and social services industries. The county has an 81% high school graduation rate, while less than 15% of Rockingham County residents have an education level higher than a bachelor’s degree.

“After an extensive site selection process, we are confident that the Reidsville community not only has a quality workforce but is also well aligned with [Pella’s core] values and will help us continue to live up to our reputation as a great place to work,” Yaggi said.

Pella officials said the project was made possible through strong partnerships between the City of Reidsville and the state of North Carolina, as well as the Rockingham County Center for Economic Development.

As part of its decision to expand in Reidsville, the company received a Job Development Investment Grant (JDIG), which was approved by the state’s Economic Investment Committee. The grant will be dispensed over a 12-year term and offers Pella up to $1,214,000 if the company meets job creation and investment performance standards set by the state.