Arlin Kethley, the owner of Paul Ryan Windows, recently donated $10,000  to the Pasadena (Texas) ISD Education Foundation to help students affected by Hurricane Harvey. This charitable contribution will help these students recover and replace instruments that were damaged during the storm. 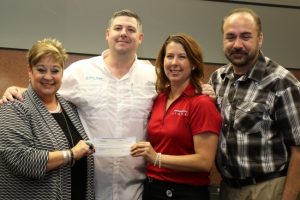 Kethley attended Pasadena ISD schools Pommeroy Elementary, Southmore Intermediate, and later graduated from Sam Rayburn High School. He started Paul Ryan Windows in 2011 and attributes much of his success to growing up in a community that believes in locally-owned businesses.

“Pasadena is close to my heart, and I am fortunate to be able to be in a position to help these kids in any way that I can. Giving back to our community is an important part of our business model at Paul Ryan Windows,” said Kethley. “These children deserve to continue their music programs as we take the time to recover as a city from the aftermath of Harvey.”