While some exhibitors admit they were initially skeptical about hosting WinDoor in Quebec City this year, by the time the show was over (yesterday), most said those concerns were gone.

“This is definitely an underestimated area,” said Marco Patterman, a representative for Konrad Hornschuch AG, an exterior and interior laminates provider. “This was an excellent show.”

Amid day one, “You were talking to one person, and then the moment you turned around, another was there,” said Mark Heckler, sales engineer for Roto-Frank of America Inc.

The decision to move the show, as well as its recent revival after what some described as “a couple of off years,” have become synonymous with the name “Stephane.” While serving on the board of directors for Fenestration Canada, Stephane Labelle spearheaded the success of WinDoor 2018. That accomplishment helped to land Labelle as Fenestration Canada’s incoming executive director—an announcement that was met with much applause amid the event’s opening night. 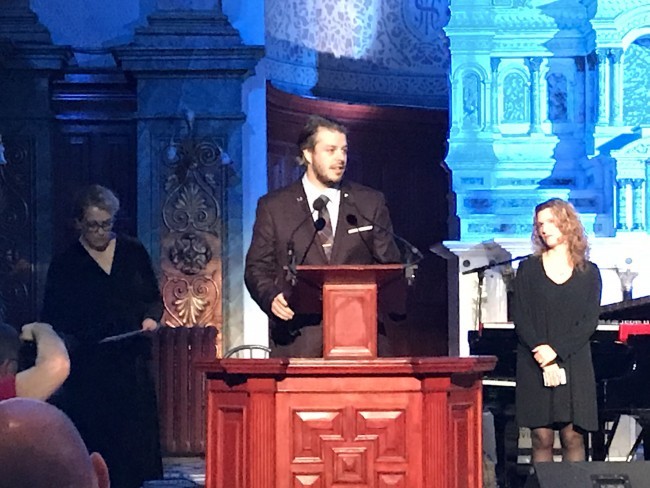 While Labelle is quick to point out that he’s no one-person team, in many ways WinDoor has become known as his show.

“They trust me and asked if I’d like to take over,” he said. Regarding his success, “It’s easy when they say, ‘You guys do what you can do,” and then they trust you,” he said of Fenestration Canada’s executive leadership.

Regarding the decision to move the show to Quebec this year, “We all know that Toronto is a great place to hold events,” Labelle says. “But when you go back there year after year, you end up with people who say, ‘Well, I don’t need to come every year. I’ll just come every other year.’” Meanwhile, “We want this to be a big networking event,” Labelle adds. “Changing the location makes it more enticing.”

On the educational side, WinDoor hosted its sessions in relatively small rooms, but managed to fill most to standing-room-only capacity. Two of Wednesday’s sessions cued in on bringing door and window companies up to speed in areas that guest presenters say they understand aren’t always a first order of business: employee training and the North American Fenestration Standards (NAFS).

NAFS, which made its debut in Canada in 2010, via the national building code, now applies to most of the country’s buildings, said presenter Al Jaugelis, of RDH Building Science. Several provincial codes in Canada currently require NAFS compliance, including the 2012 British Columbia building code, Ontario’s 2012 code and Vancouver’s 2014 building bylaw. Meanwhile, it’s important for American manufacturers to realize that NAFS in Canada isn’t necessarily the same as what they’re accustomed to in the U.S., he added.

“NAFS is in the code for three reasons: to resist wind pressure, to resist water penetration and to resist air leakage,” Jaugelis said. “And that seems kind of simple—performance class, performance grade and test methods.” Those are the only properties reported on the NAFS label, he said. “The code is using NAFS as a way to qualify products for performance.”

There are some pitfalls for manufacturers to avoid in getting their products tested for NAFS, he warned–including the temptation to test at gateway sizes.

“A lot of manufacturers went to labs and said, ‘Ok, what should we test? Well, we should test to the gateway size,’” Jaugelis said. “But it’s important to clarify why the gateway size exists. It’s just an entrance into a performance class.”

Gateway testing is not required, he said, and manufacturers should be forewarned that the certification it provides may not apply in cases when an actual product differs in size from what was tested.

“The good news is, your customers don’t care about this,” Jaugelis said, followed by a jovial applause from several in the audience.

In a later session, Laverne Dalgleish, principal for Building Professionals, stressed the need for better and more concise programs aimed at educating installation professionals, where he says things are lacking these days amid the construction industries.

“We don’t have the training available today that we used to have,” Dalgleish said. Meanwhile, he says, there’s very little impetus for workers to take on the responsibilities for product training.

“The contractor has a lot of responsibilities,” he said. “That’s the person who signed a contract with legal implications.” On the other hand, workers have no such scope of responsibility.

So far as how door and window companies should successfully train their installers, Dalgleish’s advice centered on keeping it simple.

“I’ve seen it time and again, where manufacturers consider everything they want to be included in product training, then they align their top technical person to present it,” he said. And while technical experts and representatives might be highly skilled at developing things like product specifications and guidelines, those same individuals tend to lack the skillsets necessary for communicating for the purposes of training.

“You have to drill it down to exactly what the person needs to know and needs to understand,” he said. “Don’t put in more than you need. Stick to what they really need to know in order to do their job.”

Reading and understanding quantities of technical documents and building codes, “isn’t a task for the installer,” he said. “It’s employers’ responsibilities to teach them the exact applicable steps.” 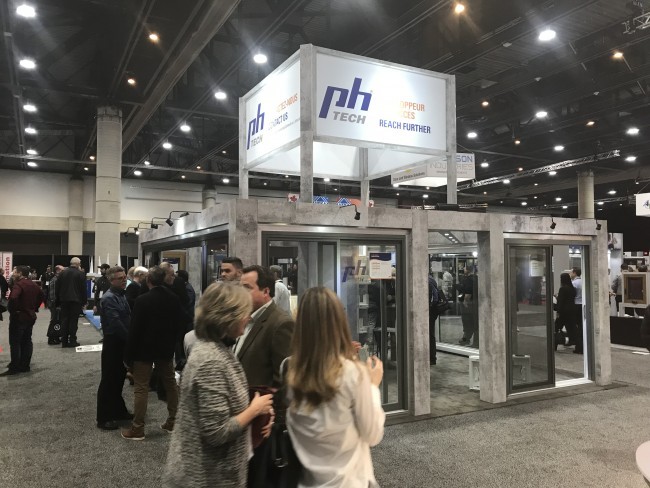 PH Tech walked away with a Best Booth Award this year in the doors category.

The event drew some impressive efforts in product displays and booth designs this year, numerous of which were given awards by DWM. The Best Overall Booth award was given to Energi Fenestration Solutions, for its innovative display of door and window options. Garnished in bright LED lighting, the company’s display stood out like a marquee at the sole entrance to the show floor, where it chose to display its Performance Series Aluminum In and Out door and window system. The product was also on display earlier in the year at GlassBuild, but in many respects remains ahead of its time, company officials suggest.

“It’s already meeting preliminary requirements for 2030,” said Jean Marois, Energi’s director of sales and business development. So far as why his company aims so far ahead, “I love it,” Marois said. “We have these challenges to meet. The way I see it is—it’s going to be there one day, we might as well work on it.”

In other awards, most creative booth went to Robover, for the company’s unique use of a shipping container; Screenco took home best marketing campaign for its Evolution Series; and manufacturers Veka and PH Tech walked away with best product awards for windows and doors, respectively. Meanwhile, Kömmerling grabbed attendees’ attention and netted an award for its sliding door hardware, which remotely powers sliding doors.

Labelle says the show will land back in its home base of Toronto every other year going forward, but will continue to rotate in order to keep things interesting.