“The green wave is coming,” announced officials for the National Fenestration Rating Council (NFRC) yesterday, and along with it an expected 25% increase in the market for doors and windows, they added. That was one of several messages used to usher in the council’s Annual Spring Committee Meeting this week, which is being held virtually.

“That is a huge deal for NFRC and for the industry,” said CEO Deb Callahan, about the council’s predictions. “We have a responsibility to make sure that we’re a part of it—to make sure that our programs still operate with rigor … and also to ensure that we’re communicating outward to consumers and others about the importance of efficient windows and the importance of what we do as an organization.”

The council has emerged from what officials report was a challenging year in 2020, amid COVID-19—one that Callahan said tested the resolve of NFRC’s staff. Thanks to the conditions of remote work and a “changing landscape” amid the pandemic, “It wasn’t a typical first year,” said incoming board chairperson John Gordon.

After finding its footing, however, the organization managed to improve financials, Callahan said, while hosting its meetings virtually. Despite the effectiveness of those formats, however, officials said they have their “fingers crossed” for an in-person meeting in October, in Atlanta.

But not everything has fared well for NFRC amid the pandemic. Callahan paused in the opening minutes of the welcoming session to acknowledge what she described as a misstep.

“As many of you know, we stumbled at the end of the year, in meeting some critical FenStar program deliverables,” she said. “We endured several rocky months before successfully meeting a crucial deadline set by the [U.S. Environmental Protection Agency (EPA)].” Those issues have since allowed for reflection, she suggested, and will result in “course corrections” going forward—including better collaborations with the EPA and program participants.

Amid a three-year strategic plan, two of the organization’s major goals include achieving greater recognition in the residential market and expanding the reach of its commercial program, Callahan said, as it plans to yield $6.3 million in revenue in 2021. 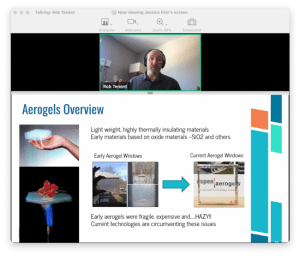 Riding the impending “green wave” will require advancements in glass technologies designed to add efficiency to windows and glazing. As a result, “There are some new things happening here and we are starting to see more technologies develop,” said Rob Tenent, a scientist at the National Renewable Energy Laboratory (NREL) and NFRC board member. While advancements have occurred among such things as vacuum insulating glass (VIG) and insulating glass units (IGUs) that use thin glass, the “punchline” for his presentation was aerogels, Tenent said.

In what he described as a “quick flyby” of technologies, he described the material as “extremely good” at insulating. At the same time, it has been held back from windows by its “hazy” appearance. “But that’s where the breakthroughs have been in the last handful of years—in terms of moving these technologies over to something that is optically transparent,” he said.

Several companies have achieved transparent formats, including some that rely on bio waste materials to create nano-cellulose structures that are clear and flexible. The latest versions have been scaled to as much as one square meter in size and are now being developed for integration into IGUs, he explained.

In the meantime, as the industry awaits aerogels, the use of thin glass is finally gaining traction, Tenent said. Units have emerged producing up to R-10 windows in quad-pane formats, he said, as companies are working to automate high-capacity lines for production. VIG, on the other hand, “is here,” he said, adding, “It’s been here for a while.” But despite nearly 20 years of development, the product still faces challenges, he explained—including issues of durability.

“Nature abhors a vacuum, as we’re most aware,” Tenent said. “Being able to maintain the low pressure between glass lites that’s required to get performance is probably the biggest challenge.”

Researchers are now working to pinpoint VIG’s ability to endure thermal stress, he said, including cases where opposite surfaces are subject to warm and cold temperatures, which in some cases has been shown to cause bowing. So far, the exact parameters leading to these issues have yet to be fully determined, but promising developments focus on the use of a flexible edge seal, he said.

Among the most exciting technologies that Tenent sees on the horizon for commercial glazing are transparent, photovoltaic cells, which, once developed, can be incorporated into the facades of commercial buildings. Several new technologies have emerged, he said, including the accidental discovery of a form that not only generates electricity, but exhibits thermochromic properties.

“This sounds like science fiction,” he said. “But it is happening.”