A name like Cogliani is suited for carrying a multi-generational business. The sound rolls off of your tongue like something that could be hand-stenciled to the side of an antique work truck. And while—so far as he knows—no such truck exists, says Anthony (Nick) Cogliani, as of January 1, he’s the third generation leader for Newpro Home Improvement Solutions. As incoming president and chief operating officer for the Woburn, Mass.-based door and window dealer, he follows in the footsteps of his father, Nicholas Cogliani, who followed in the footsteps of his parents, who founded the business in 1945 out of their residence. And there may be no multi-generational work truck, but there’s plenty of evidence to suggest that—with the name Cogliani—comes a gene for grit and entrepreneurialism.

The company originally began as Northeast Window Products, a window treatment business that was based out of Nick’s grandparents’ basement in Medford, Mass. But in 1978, Nicholas Cogliani (Nick’s father), took the business in a different direction from his parents, pursuing replacement windows. Amid a national energy crisis, that move proved to be a lucrative choice. And so the name was abbreviated to Newpro, as the company became a window dealer. Meanwhile, “He’d still have it that way today,” Nick says of his father. “If he could [just] sell a white, vinyl window, he’d be the happiest guy on Earth.” Instead, Newpro now offers roofing, siding and even bath products. But those changes didn’t come easy, Nick says, as he explains that—with any multi-generational, family-owned business—passion runs deep and new ideas tend to get contested. 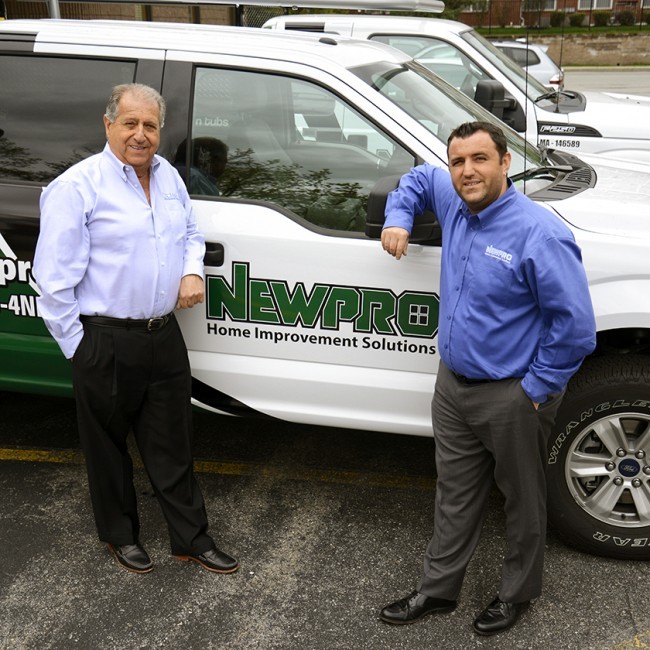 Nicholas Cogliani (left), past president and now Chairman for Newpro, recently appointed his son, Anthony (Nick) Cogliani, president and chief operating officer, making him a third-generation leader for the door and window dealer.

“That’s kind of the route I wanted to take initially,” he says. But when he presented some of those ideas to his father, “We actually had some business coaches come in to help us communicate better, because things that I wanted to do, he didn’t, and things he wanted to do, I didn’t,” he explains, now chuckling about the experience.

“Once we did your windows and doors, we really had nothing left to sell you,” he says. “Now, each customer’s value is well over $100,000. If we do a great job for you on your windows, or your doors, you’re hopefully going to call us back for your siding, your roofing and your bathrooms.” The company is completely different these days, he adds. “We’re paperless and we have all the latest and greatest technology and tools surrounding us. It’s totally making us a better company—more productive, more profitable.”

And that’s a far cry from his grandparent’s basement, where, “There were no computers for calculating payroll. She did it by hand,” he says of his grandmother, Mary Cogliani. Mary passed away recently, he says, at the age of 101, but worked until she was 93 years old. Her mother lived to be 105.

Regarding his father, who now lives in Arizona, “I told him he’s not allowed to come back here anymore, because all he does is complain about the cold weather,” Nick says. “And I refused to move into his office until he was ready to commit to not coming back to work.”

And while it might go against his nature, for all intents and purposes it appears that he will not. As of January 1, he passed the torch to his son, making the change of leadership official.

At the same time, “We talk eight times a day,” Nick says. “He’s my father and my best friend.”