When Win-door North America wrapped up before those in the U.S. celebrated Thanksgiving, it was evident that door and window companies in both the U.S. and Canada have a lot for which to be thankful.

Chris Dimou, president Roto North America, reported that business has doubled organically in the last five years. “It’s encouraging to see that happen the last couple of years and especially this year the market has been developing so this is also very positive.”

He also reported that the company’s new Corner Drive product has received great feedback from its customers. 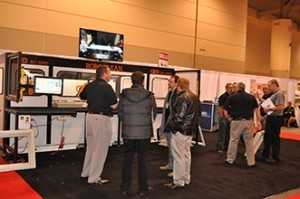 Windowmaker Software sold its RoboClean machine before the show’s end.

Diane Huybers, business manager at Windowmaker Software, also said “it has been a great year thus far for the U.S. and Canada.”

And the proof is in the buying, so to speak. On the machinery side, Joe Shaheen, director of sales and marketing for GED Integrated Solutions, reported that the company sold the RoboClean product on display at its booth to a Canadian customer.

As always, there were many new products on display, and several of them were on the door side. Novatech always has a variety of products on display and this year was no different. One of the products was an 8-foot door. “There is a real trend for 8-foot doors,” said Brigitte Cantin, marketing manager.

But the star of the show may have been the company’s new integrated aluminum mini blinds.

“Everyone wants it,” said Cantin. “We have had a huge response to this product.”

The company also unveiled its gliding garden door which can match the entry door and patio door starting in 2015. The unit on display also had an integrated retractable screen.

Cantin also highlighted the Barcello door which she says took two years to develop and offers privacy that complies with the new building code in Canada that goes into effect in 2015.

Novatech wasn’t the only company talking to attendees about building code compliance. At the Therma-Tru booth, Sarah Brainard, marketing specialist, reported that they were focused on letting attendees know that the company’s products are tested to meet the new National Building Code of Canada. 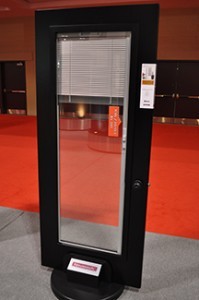 “We want people to know we are testing and getting ready for that,” she said.

He pointed out one door with a flush skin that is available with V-grooves.

“Fiberglass didn’t have the flexibility wood did and now we do,” said Kussen.

The company also displayed a 42 inch door with a square top. “No one has a square top, especially in this market,” said Kussen. “That’s all they want.”

The company also just purchased another moulding press, which should be operational in the spring.

Also, Laurentide unveiled its new Uraqua, which is an all water-based low VOC coating that can be used on any substrate.

“We are getting a ton of interest in this,” said Laurentide’s Robert Nadra.

All in all it was a great year for Win-door to celebrate its 20th anniversary. DWM spoke to Raymond Oulette, chairman of the board of Novatech who was involved when the Win-door show was formed 20 years ago. He was serving as president of Fenestration Canada at the time.

“Jim Parker came to us and strongly suggested a show like this,” he said. “We really needed a show for the window and door industry in Canada.”

When asked if Win-door will continue for 20 more he said, “Our industry needs the show for 20 more years.”