The Joint Center for Housing Studies (JCHS) at Harvard University released its annual The State of the Nation’s Housing report on Thursday, which suggested that though the U.S. housing recovery faces a number of challenges, it should regain its footing. While tight credit, unemployment rates, and the sizable student load debt have kept many Millennials from buying homes, “as long as the economy remains on the path of slow, but steady improvement, housing should follow suit,” says Chris Herbert, research director at the JCHS.

Despite Milliennials’ inability to purchase homes, the housing industry saw notable increases in construction in 2013. Overall construction starts jumped 18.5 percent from 2012 to 925,000 units.  According to the report, this will mark “the sixth consecutive year that starts failed to hit the 1.0 million mark – unprecedented before 2008 in records dating back to 1959” and is much less than the historical average of 1.46 million. 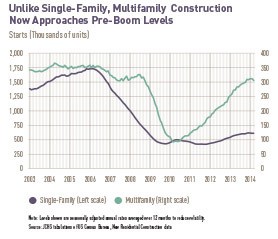 A figure included in The State of the Nation’s Housing by Harvard University.

Meanwhile, multifamily construction experienced its third consecutive year of solid growth.  According to the report, starts were up 25 percent, or 62,000 units, to 307,000 units.

Owner spending on improvements to existing homes has also risen over 2012 levels.  In 2013, overall homeowner expenditures rose 2.4 percent to $130.9 billion, which is just 10 percent below its recent peak.

Lastly, as of March 2014, expenditures for homeowner improvements contributed to 39 percent of total residential construction spending, which is well above its historical average of 30 percent. This trend of disproportionate homeowner investment is expected to be repeated in 2014.  The report, citing the Leading Indicator of Remodeling Activity, said that “homeowner outlays should increase during the first three quarters before slowing in the fourth quarter” due to weakening home sales early in the year.

The report asserts that while the market continues its gradual return to normalcy, there is still more ground to gain.