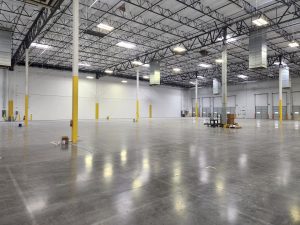 The acquisition expands on the company’s 170,000-square feet of space and is actually located in the back half of the current facility. Western Window Systems took possession of the new area in April 2022 with eyes set on the future after the previous tenant vacated.

The acquisition of more than 78,000-square feet of additional space has Western Window Systems of Phoenix excited for the future. The development will result in better customer service and increased capacity at both facilities, serving to reduce the lead times plaguing much of the industry. Production in the new building could begin as soon as July 2022.

“We just took possession of an additional 78,000-square feet to continue our growth,” Mike Wothe, president, posted on LinkedIn after the acquisition. “Thanks to all of our customers and their partnerships Western Window Systems is blazing a new path.”

The acquisition expands on the company’s 170,000-square feet of space and is actually located in the back half of the current facility. Western Window Systems took possession of the new area in April 2022 with eyes set on the future after the previous tenant vacated.

“Growth has been going on for the past year and a half, basically,” says Mark Yeandle, vice president of operations. “Of course, we’ve had continuous growth for many years but the growth we’re experiencing today has been for about a year and a half or longer.”

The additional space will allow for not only continued growth but also increased efficiency, Yeandle says. After speaking with manufacturing engineers, Western Window Systems decided it could move window production to the new facility while the original facility focuses on doors.

“So basically, we’re going to have a window plant and a door plant. We’ll split window manufacturing into two lines instead of the current one, and be able to increase our output to meet the customer demand,” Yeandle says, noting capacity can also then increase at the original facility.

That will help the company reduce lead times, as it, along with much of the industry, is experiencing increases.

“From a customer standpoint, it’s going to allow us to provide a higher level of customer service, which shortens lead times,” Yeandle says. “For suppliers, more business for us means more business for them. We have a really good relationship with suppliers, and an even better relationship with customers. It allows us to continue to be the preferred supplier in the market.”

The new space will include nearly 11,000-square feet of office space, as well as additional benefits for team members including a gym and on-site clinic. And much of the work required to make the facility functional is already underway. That includes establishing a communication line between the two buildings so they’re both on one system, as well as electrical and office renovations.

“Our plan is to be producing out of this building sometime in July,” Yeandle says.